Cape Sounio and The Temple of Poseidon - Private Tour 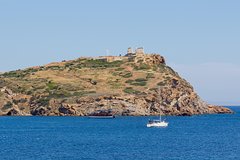 Cape Sounio and The Temple of Poseidon - Private Tour

On the way to Cape Sounio we'll take the beautiful coastal avenue and pass through marvelous places and suburbs like Palaio Faliro ,Glyfada , Vouliagmeni where we will stop for a while to visit the unique Lake of Vouliagmeni. Its name is associated with its creation since according to geologists, the lake was formed when collapsed and sunk the roof of a cave.

In the same territory, we will visit the tourist resort area very known as the Laimos of Vouliagmeni that is the most luxurious place of Athenian riviera.

After a really interesting coastal drive with beautiful landscapes villages and towns, we will reach the southern end of Attica named Cape Sounion. You will see one of the most beautiful ancient temples from the 5th century B.C., the temple of Poseidon the god of the sea. It is built in such way, that you should visit the temple in the afternoon so you can enjoy one of the most beautiful sunsets in your life! The private tour concludes with the return in our starting point.

Palaio Faliro is a beautiful suburb situated on the east coast of the Phalerum Bay, a bay of the Saronic Gulf, 6 km southwest of Athens city center.

Glyfada is packed with some of the capital's best-known nightclubs, upscale restaurants, and shops. It could be argued to be one of the most "Americanized" of Athenian municipalities since an American airbase was located nearby until early 1990.

The Lake of Vouliagmeni is 21 km far from Athens it's very known because of the medicinal waters.

An amazing sea resort with beautiful beaches for swimming

Cape Sounion is located at the very end of the Attica Peninsula. Very known for its Temple of Poseidon, one of the major monuments of the Golden Age of Athens.