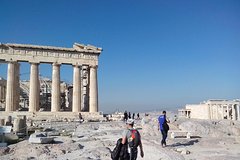 From pick up at your Hotel, Cruise ship or Athens residence sit back in the full leather comfort of one of our new Mercedes, AudiA6 or other luxury models in the company of a professional tour driver who will take you to all the highlights including the Acropolis, New Acropolis Museum, Arch of Hadrian, Temple of Zeus, Olympic Stadium, Parliament & changing of the guards, Ancient Agora, Plaka and Lycabettus Hill for a final panorama of the city below, so you won't miss anything during your visit

Our 'go at your own pace' tour takes the time you need, whether you are a multi-generational family, seasoned guest requiring a more gentle pace, or just want the photo stops, our permanent staff of drivers have the experience to tailor things for you as you learn along the way about the history, mythology & stories which make Athens one of the worlds great Capitals.

With hassle free booking options such as inclusion of a traditional lunch we aim to make your tour the highlight of your visit.

Visit the Acropolis & its associated temples including the Parthenon, Temple of Nike and Temple of Erechtheion. Stop at Herodes Atticus Theatre.

Explore the New Acropolis Museum situated adjacent to the Acropolis which houses the many masterpieces from the site. If you prefer you can continue without entering also.

Market place of the Ancient Greeks & centre of political & social life. A significant site home to the philosophers, craftsmen & housing the remains of many important buildings including an on-site museum in a recreation of an ancient market and the Temple of Hephaestus, best preserved ancient temple in existence.

Similar to the Ancient Agora, the Roman Agora was the center of life during Roman times

Your driver will guide you through the Plaka area at the heart of modern Athens blending the new with the old and full of the sites sounds & daily life in the city.

At the tomb you will see the impressive changing of the guards ceremony, with the iconic 'Evzone' guards in their traditional uniform.

Stop at Panepistimiou str, for the Athenian Trilogy  the three elegant buildings: The University, The Academy and The Library.

Ascend to the top of Lycabettus hill for an amazing panorama viewpoint of the city & a perfect photo stop.

Main square of Athens housing the Parliament building & focus of much of Athenian life & Politics.

A short stop at the The Neoclassical Maximos Mansion, also called the Greek White House. Official residence of the Prime Minister of Greece since 1982