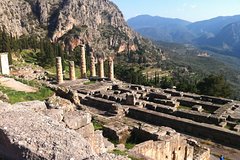 After arriving from Athens, visit the Castalia spring. This is where the high priestess, or Oracle, would bathe to cleanse her body and soul. Next visit the Temple of Athena, with its unusual round, colonnaded thalos.

The Temple of Apollo was the center of this navel of the world. Nearby stands the restored treasury Athens built to house its offerings.
Athena Pronea

Offerings that were not pillaged from the various treasuries are collected in the Delphi Archaeological Museum. There you will see the famous bronze Charioteer statue, which still retains its inlaid glass eyes. Other attractions include the amphitheater and Asklipieion.

You can have a lunch of traditional Greek food in the nearby village of Delphi.
king Leonidas

After we going to visit Thermopylae. The place were the 300 Spartans with their famous King Leonidas and 1100 Thespies horsemen opposed and died against King Xerxes and the Persians.

The ancient Greek city-states warred with each other, but all considered Delphi sacred and brought lavish offerings to Apollo to get advice from the famous Oracle there. Splendid ruins and art remain as a legacy for you to explore in the shadow of Mt. Parnassus.

The place were the 300 Spartans with their famous King Leonidas and 1100 Thespies horsemen opposed and died against King Xerxes and the Persians.