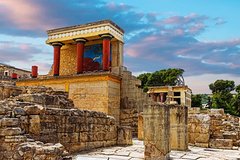 Enjoy a full day excursion from Chania to the heart of Minoan Crete. Visit the magnificent palaces of Knossos and the Archaeological Museum. Explore the historic Heraklion City downtown area with its medieval monuments and Koules Fortress or enjoy its many shops, cafes and restaurants.

Breakfast in a cafe shop with beautiful view

Knossos, Crete is the largest Bronze Age archaeological site on Crete, probably the ceremonial and political centre of the Minoan civilization and culture.

It has been substantially and imaginatively "rebuilt", making the site accessible to the casual visitor in a way that a field of unmarked ruins is not.

The Palace of Knossos is the largest and most spectacular of all the Minoan palatial centres, covering an area of 20,000 sqm. The palace had many storeys, it was built of ashlars blocks and its walls were decorated with splendid frescoes, mostly representing religious ceremonies.

The Heraklion Archaeological Museum is one of the oldest and most important museums in Greece, and among the most famous museums in Europe. It houses representative artefacts from all periods of Cretan prehistory and history, covering a chronological span of over 5,500 years from the Neolithic period to Roman times. The Heraklion Archaeological Museum prides itself for its unique Minoan collection, which includes the masterpieces of Minoan art. It is rightly considered as the Museum of Minoan Culture par excellence.

Explore the historic Heraklion City downtown area with its medieval monuments and Koules Fortress or enjoy its many shops, cafes and restaurants.