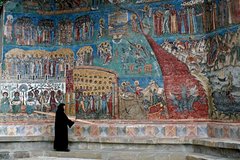 Travel for 8 days from Budapest to visit the European Capital of Culture of 2019, Timisoara, and Sibiu, the former capital in 2007. It looks at how different cultures interact and coexist peacefully with each other in the same country. Relax by admiring the greeAAn of the Carpathians and have fun knowing Bucharest, its wide avenues, its history and visit its main tourist destinations. You will appreciate Sighisoara, UNESCO World Heritage Site and the birthplace of Vlad Dracula. You will see the famous and beautiful Dracula Castle and the luxurious Peles Castle in Sinaia, nicknamed the Pearl of the Carpathians for its magnificent buildings and the greenery that characterizes it. Thanks to this experience you will visit the Pass Borgo, the Bicaz Gorges and the beautiful monasteries of Bucovina, frescoed inside and outside, among which you will recognize the Sistine Chapel of Romania with a very special universal judgment.

Alba Iulia, an important city from a historical point of view, because the Great United Romania was made here on December 1st, 1918. Walking tour of the city-fortress

Walking Tour of Sibiu, the European Capital of Culture in 2007, dominated by the Tower of the Clock or Council Tower dating to the medieval era and by the extensive 18th  19th century Brukenthal museum, the former residence of the governor of Transylvania. The big square, the small square and Huet Square, with the Evangelical Cathedral, show off in all their beauty.

Visit to the city of Sighisoara, with its imposing Clock Tower. This citadel is the best preserved in Europe and, extraordinary, it is still inhabited. Since 1999 the historic center of Sighisoara is a UNESCO heritage site. Here we will admire the church on the hill, reachable after a wooden staircase called the schoolchildrens ladder. We will also see the statue of the famous Hungarian national poet Petofi Sandor, testifying to the fact that in Sighisoara the Magyar community was in the past numerically important. Next to the statue is the beautiful Catholic church, reserved for the Hungarian community, and the tower of the shoemakers. Lunch at the house where Vlad the Impaler was born (not included)

Targu Mures is dominated by the beautiful Palace of Culture, symbol of the locality, an extraordinary baroque palace. In this transylvanian city, the Hungarian community is still numerous and the architects who have worked on the design of historic buildings are all Hungarians

Moldovita monastery is another famous religious monument, founded by Pietro Rares in the 16th century and whose interior and exterior frescoes enchant the visitor.

Sucevita monastery was founded by the Movila brothers in the seventeenth century. It presents Gothic and Byzantine elements, which merge to form the fascinating Moldovan architectural style. The frescoes on the northern façade of this monastery have remained visible thanks to the protective walls that have never been demolished here

Voronet, nicknamed the Sistine Chapel of the Carpathians, founded by the great prince Stephen the Great and characterized by a beautiful blue color, inimitable and unique in the world

he Bicaz gorges are crossed by a road flanked by a stream and constitute a landscape of strong emotional impact with thrilling cliffs. Along the gorges there is a market with typical handicrafts and souvenirs that make the attraction even more lively.

Stop At: Peasant Fortified Church at Prejmer, East side of the Brasov Depression, Prejmer 507165 Romania

Visit of the Red Lake, a natural barrier lake, which was formed following the landslide of a part of a mountain, in fact the trunks of the trees are still present in the lake and this gives a particularly evocative atmosphere. The place is interesting especially for the legends that were born and have spread in reference to the name of the lake. During the visit you will become aware of these legends.

Brasov, a wonderful Transylvanian town, once entirely fortified, an important cultural, tourist and commercial center. Brasov impresses with its typically German architecture, where the Gothic, the Baroque and the Renaissance intersect to give life to an interesting and culturally very lively city. Visit of the First Romanian School, which is located in the oldest district of the city, and which was inhabited exclusively by Romanians, the Schei district, interesting for the entrances into the city that were carried out in medieval times through the Caatherines and Schei Gate, quest last of the nineteenth century. In Brasov we will also visit the impressive Black Church, the largest evangelical Gothic church in Eastern Europe, with a 65 meter high bell tower and a length of 90 meters, the church houses the most beautiful nineteenth-century mechanical organ of Romania. We will then admire the palaces and houses of the historic center, recently restored, with the Council Square which now houses a beautiful museum, and the pedestrian Avenue of the Republic.

Bran is where we will visit the famous Bran Castle, better known as Draculas Castle. In the Middle Ages, Bran was exactly on the border between Wallachia and Transylvania, so it was essential for the inhabitants of Brasov to build and preserve a defensive stronghold. In the 90s of the 900 this fortress was transformed into a beautiful castle thanks to the intervention of Queen Maria of Romania

Visit to the fabulous Peles Castle, the summer residence of the first king of Romania, the King Charles 1 of Hohenzollern, of German origins. The castle was beautifully designed by a Czech architect, and is famous for being one of the most modern castles in Europe at the time of its construction, between the 19th and 20th centuries. Each room is characterized by a unique style, different from the styles of the other rooms. We will also admire the Florentine room, where we will breathe a typically Italian and Renaissance atmosphere.