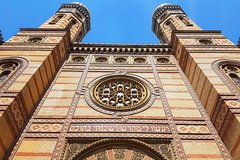 The Budapest Jewish quarter is not limited to the Great Synagogue, and the ruin bars. Let us reveal the hidden stories, and the unique atmosphere of the district. We would like to introduce you a neighborhood, which had witnessed many terrible things, but somehow has become today's most hip and fun quarter of our city.

Well show you around the ruin bars and the coolest murals of Budapest's Street Art culture. Well see the special architecture of the neighborhood, buildings from the 19th century, including vivid Art Nouveau residential buildings, as well. We'll peak into the most authentic synagogue of the inner town, which is for the orthodox community.