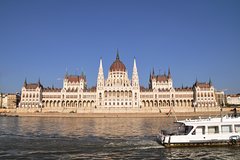 When in Budapest, don't miss the opportunity to take a tour of the city's spectacular Parliament House, home of the Holy Hungarian Crown. Youll discover Hungary's largest building on a guided tour and see some of Budapests finest architectural achievements such as the splendid Session Room, the Great Vaulted Hall and impressive central staircase.

Budapest's magnificent neo-Gothic Parliament was built between 1885 and 1902 along the Danube embankment, and was for a long time the worlds largest parliamentary building.

With 691 rooms and staircases stretching for more than 12 miles (20 kilometers), the building is topped by an elegant dome soaring 226 feet (69 meters) into the sky. Ornamented with white neo-gothic turrets and arches, the Budapest Parliament forms one of the citys most outstanding landmarks.

Your guide will entertain you with anecdotes and historical commentary while leading you through the Parliaments magnificent interior rooms with its many architectural highlights.