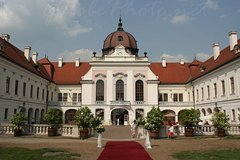 Visit the magical former Palace of Queen Elisabeth. During the tour you can get acquainted with the Austro-Hungarian Empire and the life of Sisi. Discover the secrets of the Palace and take a graceful walk in its beautiful Garden!

The Grassalkovich Palace in Gödöllő is not just a museum, but the largest Baroque palace in Hungary with unique architecture.

A wide range of cultural events and traditions make the Palace one of the most interesting and attractive buildings in Hungary.

The Royal Palace of Gödöllő or Grassalkovich Palace is an imperial and royal Hungarian palace located in the municipality of Gödöllő in Pest county, central Hungary. It is famous for being a favourite place of Queen Elisabeth of Hungary. After visiting the exhibition, you can take a walk in the beautiful garden of the palace and / or have a cup of coffee in the palace's café.

The World Peace Gong on the Szabadság (Liberty) Square is the fifth in the world and the first and only European peace gong which was given by Indonesia as a present and a symbol of worldwide friendship and fraternity to the town of Gödöllő. The gong shows the flags of all the countries, the symbols of all the religions and the maps of the oceans of the Earth. It was created by the World Peace Committee as a memento for the bomb attack in Bali in 2002. The gong was offered to Gödöllő in 2007 as an acknowledgement of advances in civilization, technology and economy as well as the peaceful social circumstances in Gödöllő. The gong weighs 150 kg; it is a 2m diameter bronze circle relic, the work of Djuyoto Suntani, an Indonesian sculptor. The gong was inaugurated on 2 May 2007. The story of the gong is engraved in the small plaque in front and the park around it is populated with shrub species typically found in the Tropics. The gong remains in excellent condition, apart from the scratching out, prior to 2009, of the Israeli flag.

The baroque-style Reformed Church, built in 1745, is an onion dome church with a beautifully simple façade. The building process was patronized; the money and the plot for the church were donated by Antal Grassalkovich I who had demolished a Reformed Church built in 1657 at the site of the present Royal Castle. The new church was consecrated in 1745. It was renovated several times: in 1912, the complete painted and carved wooden ceiling and the chancel were changed into concrete. The prang in 1945 affected the church seriously and the renovation processes took very long. The renovation of the tower was finished in 1993.