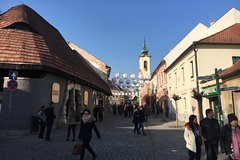 Enjoy a half-day tour from Budapest to the Baroque city of Szentendre. Here you can discover numerous galleries, cafes and lovely narrow streets. Afterwards, you will be invited to a cup of coffee and a delicious cake in an exquisite cafe.

Szentendre is a riverside town in Pest County, Hungary, near the capital city Budapest. It is known for its museums (most notably the Open-Air Ethnographic Museum), galleries and artists.

Due to its historic architecture, it has become a popular destination for tourists staying in Budapest. There are many facilities, including souvenir shops and restaurants, catering to these visitors.

Centrepieced by the Baroque-styled Merchants Cross erected in 1763, Szentendres cobblestoned main square is the bustling heart of this historic town, lined with restaurants, ice-cream shops, museums and more. Here the Blagovetenska Orthodox Church towers over everything, while winding streets and alleys stretch out in all directions  head downhill to the riverfront or hike uphill to find City Hall or Templom Square.

Also known as the Castle Church, the oldest building of the city was originally built between 1241 and 1283. Its present day plan was finalised when it was rebuilt in Gothic style in the 14th century. It was again renovated, this time in a Baroque style by the Zichy family in 1710. Its present day outlook was completed between 1742 and 1751.
The building is 200 m2 large, its tower is 29 meters tall. Its walls are supported by buttresses which are typical to Gothic architecture. On the buttress near the tower, there is a sun clock from the 1300's, a unique piece from the history of Hungary. The visitor can step inside the church through Gothic stone doors.

Behind the popular Szamos confectionery on Dumtsa Jenő utca, this old-timey museum is a family favourite for its multi-coloured statues all made from sugary marzipan, ranging from figurines based on fairy tales and Disney cartoons to life-sized statues of Michael Jackson and Princess Diana. Visitors can watch new marzipan artworks being created by craftspeople using customary tools from a century ago.

Cutting through Szentendres southernmost section, this shallow stream features a paved walkway popular among local parents for evening strolls as their kids frolic by the burbling waters. This rivulet forms an unofficial borderline for the touristy part of town.