Eight days tour of Romania starting from Budapest to Bucharest 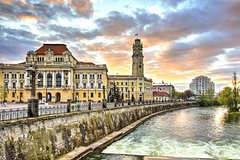 Eight days tour of Romania starting from Budapest to Bucharest

Visit the most important touristic landmarks of Romania in an 8-days tour from Budapest.

Your Romanian adventure will begin in the western region of Romania, where you will discover the city of Cluj and its surrounding attractions, the Turda Salt Mine and the Alba Carolina Fortress. You will then step into the region of Bukovina, where you will discover the religious side of Romania with a trip to the Painted Monasteries. Here, you will also discover some of the local life, before heading into the region of Transylvania, where your experience will continue with magnificent medieval castles and cities (Bran Castle, Sighisoara) and quaint traditional villages (Biertan, Viscri).

Pass By: Budapest, Budapest, Central Hungary
Your tour starts in Budapest, where you will be picked up by our guide from your hotel or from your requested location. At 10 AM you will leave Budapest and take a 4-hour trip to Oradea.

Stop At: Oradea, Oradea, Bihor County, Northwest Romania, Transylvania
Once in Oradea, you will have free time for lunch, and then you will check-in at a centrally located hotel.

Although it is almost one thousand years old, Oradea is marked by the Vienna Secession art movement which influenced most of the important buildings of the city throughout the 18th century. The historical center was completely restored, and you will visit the Black Eagle Palace, built in the early 20th century, and the Moon Church, who got its name from a golden sphere which tells the phases of the moon. You will also take a trip to the Episcopal Palace, the Moskovits Buildings, and the Oradea Fortress, an impressive star-shaped medieval defense point.

At night, you will take a walking tour through the city center and its public gardens.
Duration: 2 hours

No meals included on this day.
Accommodation included: Overnight in Oradea

Stop At: Salina Turda, Aleea Durgaului 7, Turda 401200 Romania
After a delicious breakfast, you will head towards a beautiful town in Transylvania, Cluj-Napoca. But on your way there, you will stop at one of the most impressive underground places in the world, the Turda Salt Mine. In the last 2,000 years, over 3 billion tons of salt was extracted, but now the mine was transformed into an underground theme park where you can take a boat ride on the lake, play mini-golf, tennis, and much more.
Duration: 2 hours

Stop At: Rimetea, Rimetea, Alba County, Central Romania, Transylvania
Your next destination is one of the best-preserved traditional villages in Transylvania, Rimetea, the place where the sun rises twice.
Duration: 1 hour

Stop At: Cluj-Napoca, Cluj-Napoca, Cluj County, Northwest Romania, Transylvania
You will then head to Cluj, one of the most dynamic cities in Eastern Europe. Its history can be traced back to more than two thousand years ago when the Romanian people laid the foundation for a municipality. Your Cluj city tour starts with the Saint Michaels Church, built in the 15th century by Matthias Corvinus, one of Hungarys most important kings. After that, your sightseeing tour will continue with other symbolic buildings from the Cluj Old Town, such as Banffy Palace, the Opera House, and Mirror Street.
Duration: 2 hours

Stop At: Bistrita, Bistrita, Bistrita-Nasaud County, Northwest Romania, Transylvania
The third day of your tour continues with a visit to Gherla, the only city in Romania built in a baroque style by Armenian colonists in the 18th century. Probably the most impressive thing about Transylvania is the cultural diversity of the region, which blends beautifully into an impressive community. This can be observed in almost every town in Transylvania, including your next destination, Bistrita.

The city was founded by Saxon colonists, and here you will stop for a city tour and for a taste of the delicious local pies (the costs of the pies are not included in the total price), famous throughout the whole region.
Duration: 1 hour

Stop At: Manastirea Voronet, Strada Voronet 166, Voronet 725301 Romania
You will make a stop at Pasul Tihuta to admire the beautiful sights offered by these impressive mountains before continuing to the historic region of Bukovina.

Your first landmark in Bukovina is one of the most famous painted monasteries included in UNESCOs patrimony, the Voronet Monastery. This stunning work of art was built in 1448 in only 3 months and 3 weeks. What makes it so special is the famous blue of Voronet, a shade of blue whose secret composition is unknown to this day. Together with Santorini and Meteora Monastery, Voronet is one of the wonders of the Byzantine world.
Duration: 1 hour

Stop At: Sucevita Monastery, Dn17a 169, Sucevita 727510 Romania
Today you will visit another UNESCO Painted Monastery, Sucevita, the largest and most complete of them all. Its construction started in 1585, and its most impressive mural is the Ladder of Divine Ascent, an artwork of great importance in the Eastern Orthodox Church.

Here, you will taste some of the fresh local products in a food tasting session, which will serve as an introduction to the local cuisine. Filled with fresh products and delicious appetizers, the session will surely charm you through the unique flavors of the Romanian cuisine.
Duration: 1 hour

Stop At: The Popa Museum, Tarpesti 617317 Romania
After lunch, you will bid farewell to Bukovina and pass through Neamt, a where medieval monasteries are hidden among the wild forests. You will make a stop at the Nicolae Popa Museum, a private collection of clothes and traditional objects from one of the richest area in Romania in terms of culture. Besides getting a glimpse into the history of the region, you will have the chance to wear a popular Romanian outfit and take some photos for unique memories.
Duration: 1 hour

Stop At: Sighisoara, Sighisoara, Mures County, Central Romania, Transylvania
Your next stop will be in Sighisoara, a city renowned for its medieval architecture, where you will find the last inhabited fortress in Europe, included today in the UNESCO patrimony. The fortress is surrounded by impressive towers, each built by a different medieval guild, but the most impressive one being, by far, the Clock Tower. It was built in the 14th century, and you can climb on top of the tower for an amazing view over the narrow streets of the city, guarded by colorful stone houses.

Your next landmark in Sighisoara will be its Hill Church, with beautiful frescoes that have been preserved since the 15th century. The church is located on top of a hill, and it can be reached by climbing the 175 wooden stairs known as The Pupils Staircase.

You will spend the night in Sighisoara, a place well known for its street performers that keep alive the medieval atmosphere of the city.
Duration: 2 hours

Stop At: Viscri, Viscri, Brasov County, Central Romania, Transylvania
One of Romanias most impressive features is, by far, the picturesque landscapes: small villages hidden between the hills, inhabited by Romanian peasants who go about their business as if the whole world stands still. In your 6th day in Romania, you will take a trip to Viscri, one of the last traditionally authentic villages in the country. Here, you will enjoy a relaxing carriage ride of the surroundings and you will find out a little bit of the local traditions while talking to some of the villagers.
Duration: 1 hour

Stop At: Bran Castle (Dracula's Castle), Str. General Traian Mosoiu nr. 24, Bran 507025 Romania
You will then visit Romanias most popular tourist attraction, Draculas Castle. Going by the official name of Bran Castle, it was erected in the 14th century by the Teutonic Knights as a defense point over the main commercial route between Transylvania and Wallachia. After centuries of being used as a strategic position, the castle was turned into a summer residence by Queen Marie of Romania, and in the last 50 years its popularity sky-rocketed, mainly due to Bram Stokers Dracula.
Duration: 2 hours

Stop At: Brasov, Brasov, Brasov County, Central Romania, Transylvania
After taking a tour of Bran Castle, you will head to Brasov and visit the Black Church, the largest gothic church between Istanbul and Vienna. You will also take a walking tour through Brasovs Old Town including the Council Square, a place filled with legends that will make for an unforgettable night.
Duration: 2 hours

Stop At: Peles Castle, Str. Pelesului 2, Sinaia 106100 Romania
On your last day in Transylvania, you will go to Sinaia to explore one of Europes most beautiful castles, Peles Castle. This was the summer residence of the Romanian royal family, and it was built according to the requirements of King Carol I of Romania.
Duration: 2 hours

Stop At: Palace of Parliament, Strada Izvor 2-4, Bucharest 050711 Romania
After a tour of Peles Castle, you will make our way to Romanias capital city, Bucharest, which is less than 2 hours away. Also known as Little Paris, Bucharest will charm you with its variety of landmarks, ranging from the impressive Palace of the Parliament to the charming Herestrău Park.
Duration: 2 hours

Pass By: Bucharest, Bucharest
On the last day, you can choose to take a visit to the areas surrounding Bucharest or take a trip to Veliko Tarnovo, the medieval Bulgarian former capital city.