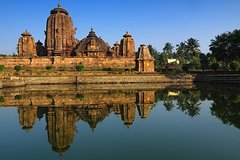 Know about the interesting mythological and cultural stories of ancient India through the temple architecture of the city.

Each temple has its unique aura depicting the lives and lively emotions of the world.

This half-day temple tour will start with your driver picking you up from your hotel at 8:00 in the morning.

After getting briefed about the tour, travel towards the old town of the city to visit various temples of historical, mythological and architectural richness. Bhubaneswar is known to be as the beloving city to Lord Shiva.

Starting with the Mukteswara Temple, it is worshipped as the temple of freedom dedicated to Lord Shiva.

From there move to the two oldest temples in the city- the Lingaraj Temple and the Parsurameswara Temple.

Lingaraj Temple is also known to be as the largest temple in the city and is believed to have the self-originated lingam of Lord Shiva & Parsurameswara Temple represents Lord Shiva as one of the avatars of Vishnu.

The trip follows with a visit to Kedargouri Temple. It has two different temples of Lord Shiva and his wife Goddess Parvati.

Later visit the Brahmeswar Temple, another temple dedicated to Lord Shiva. It is known to be as the finest piece of art with its applauding sculptures.

At the end visit the Rajarani Temple which is known to be as the temple of love.

This temple does not have any image or idol inside the sanctum thus is believed to welcome everyone inside the temple irrespective of their religious beliefs.

It has carvings and sculptures all around the temple depicting scenes of love and marriage of Lord Shiva and Parvati.