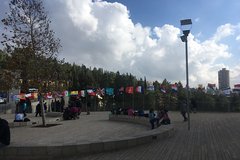 All in one day - visit Yad Vashem, Israel's official memorial to the victims of the Holocaust. It is dedicated to preserving the memory of the dead; honouring Jews who fought against their Nazi oppressors and Gentiles who selflessly aided Jews in need. Then, continue to the old city to visit the Western wall, originally erected as part of the expansion of the Second Jewish Temple. End your day on the Dead Sea, float on the water and rub black mud full of minerals on your skin before return to your hotel.

The day will start with a visit to Yad Va-Shem, a Jerusalem based museum dedicated to the Holocaust - the murder by Nazi Germany of six million Jews. While the Nazi persecution of the Jews began in 1933, the mass murder was committed during World War II. It took the Germans and their accomplices four and a half years to murder six million Jews. They were at their most efficient from April to November 1942  250 days in which they murdered some two and a half million Jews. They never showed any restraint, they slowed down only when they began to run out of Jews to kill, and they only stopped when the Allies defeated them. Next we will drive to the old city to visit the Western Wall - the holiest site for Jews, but not just. "For my house will be called a house of prayer for all nations." (Isaiah 56:7). Last site for us to visit today - the Dead Sea - one of 10 world's wonders - where you can enjoy an hour and a half of relaxation, floating and rubbing mud on your skin.

At the end of your day, you will be returned back to your hotel. A daily tour is around 10 hours with a flexible starting time.