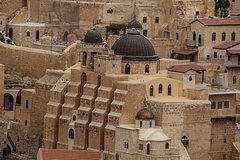 Bethlehem is one of the important christian sites in the holy lands as it contains one of the oldest churches in the world The church of Nativity. A guided tour of the church is provided as well as Saint Catherine's church and The Church of Milk Grotto. Then we continue our trip to Beit Sahour the city of The Shepherd's. Beit sahour is one of the highest cities in christian population. We will visit The Chapel of The Shepherd's where the angles first announced the birth of Jesus.

Mar Saba Monastery dates back to the fifth century. Founded by Saint Sabas, it's been extensively expanded and fortified over the years.

Lastly we will go to The Mount of Temptation & Saint George Monastery. As mentioned in the gospels the Holy Spirit led Jesus into the desert.s. The summit of the mount, about 360 meters above sea level, offers a spectacular panoramic view of the Jordan Valley, the Dead Sea and the mountains of Moab and Gilead.
*Make sure to bring your passport

A full guided tour to the Church of the Nativity. The Church is one of the oldest working churches in existence today. The first Church was built by the Roman Emperor Constantine in the 4th century AD, over the grotto where Mary gave birth to Jesus. The church is located where Jesus was born in Bethlehem.

Stop At: The Church of St. Catherine, Bethlehem Palestinian Territories

Saint Catherines Church is a Franciscan monastery. It is said to be built on the site of Christs appearance to St. Catherine of Alexandria and his prediction of her martyrdom at the beginning of the 4th century.

The Milk Grotto church is the place where the Holy Family found refuge during the Massacre of the Innocents, before they could flee to Egypt. The name is derived from the story that a "drop of milk" of the Virgin Mary fell on the floor of the cave and changed its color to white.

Mar Saba Monastery dates back to the fifth century. Founded by Saint Sabas, it's been extensively expanded and fortified over the years. Please note that women are not allowed to enter the monastery. Everyone will enjoy a panoramic view of the site.

The Mount of Temptation is located about 3km north-west of Jericho which is about 58km east of Jerusalem, Israel. The mountain is in the Judean Desert and overlooks the Jordan Valley. After being baptized by John the Baptist Jesus retreated to the wilderness to meditate and fast, this mountain on which Jesus is believed to have spent the 40 days and 40 nights of spiritual contemplation.

You can choose to take the cable car provided and have a look at the city.

Tell es-Sultan also known as Tel Jericho or Ancient Jericho, is the site of ancient and biblical Jericho and today a UNESCO-nominated archaeological site in the West Bank, located two kilometers north of the center of Jericho