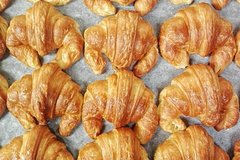 Rome is famous throughout the world for the Vatican Museums and the Colosseum, as well as for its Baroque-style buildings. There is a district of the city that has made history, including the political history of our country, which is worth a visit: it is the EUR, designed to host the 1942 Universal Exposition. If this is combined with a private pastry lesson to learn to create an "Italian-style" breakfast by tasting one of the best coffee in the city in combination with desserts prepared by you and relaxing in an elegant and refined environment, you can't miss this unusual tour of Rome!

An expert pastry chef will teach you all the secrets to prepare tasty croissants. You will learn how to produce natural yeasts and finally you will taste your Italian breakfast with a cappuccino or espresso, a yogurt, orange juice and other sweet delicacies.

Next you will visit the EUR with a private licensed tour guide. The elegant neighborhood, designed during the fascist period, at the behest of Benito Mussolini, had to host the Universal Exhibition of Rome, due to its proximity to the port of Ostia.

The event, which was supposed to take place in 1942, was never organized, because the outbreak of the Second World War blocked most of those buildings. It was only during the late 1950s that the project was completed to host the 1960 Olympic Games.

The EUR district is a masterpiece of rationalist architecture, characterized by white buildings, mostly of travertine, the local limestone used to build buildings like the Colosseum, since Mussolini wanted this area to become the Third Rome creating some buildings their inspiration from those of the Roman Empire.