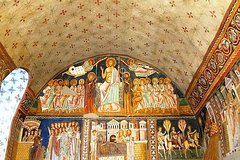 Leave Romes main tourist trail to discover the citys tucked-away treasures with a private art historianguide. This 3.5-hour walking tour puts the spotlight on several historical churches and excavations around Caelian Hill, which are often overlooked by guidebooks. Visit the Basilica of San Giovanni in Laterano, the Roman house excavations of Case Romane del Celio and an intriguing place of worship known as the medieval Sistine Chapel. Commentary covers the days of the Roman Empire through to the Middle Ages and the itinerary can be customized to your interests.

Meet your art historian guide in central Rome, and stroll to the Basilica of San Giovanni in Laterano, the first Christian basilica to be built in the city and Romes official cathedral. Admire its Borromini-designed interior, and see the table that Jesus is said to have used at the Last Supper.

From the basilica, stroll through Rome and learn about the changes that took place from the days of the Roman Empire to the dawn of Christianity through to the 10th century. If there is a sight that you particularly want to see, let your guide know. Your itinerary is flexible, as it is a private tour.

With tales of medieval Rome ringing in your ears, head to Caelian Hill and step inside the monastery of Santi Quattro Coronati to see the Chapel of Sylvester. A true treasure, the chapel is home to a rare collection of medieval frescoes, so impressive that many refer to it as the medieval Sistine Chapel.

Mid-way through your tour, enjoy a half-hour break for a snack (own expense), and then continue to the nearby Church of San Giovanni e Paolo. Admire the sturdy foundations of the Claudianum  a grandiose arcade built into the church grounds  and then head inside the church itself to see a cosmatesque floor containing secret symbols.

Lying beneath the church is the Case Romane del Celio, a series of underground Roman house excavations. The small, yet fascinating, site offers a glimpse of Roman home life, and art work, sculptures and frescoes can all be seen. A further highlight in the Caelian Hill area is Santo Stefano Rotondo, a beautiful round church that dates back to the 5th century.

After 3.5 hours, your tour ends at Via San Gregorio.