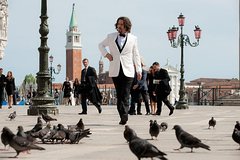 Discover the main film locations of one of the worlds most photogenic cities on a 2-hour tour of Venice. See where Everyone Says I Love You and The Tourist were shot and experience the citys monuments through the eyes of great film directors.

Follow in the footsteps of Johnny Depp, Angelina Jolie, Woody Allen and many more on an exclusive 2-hour cinetour of Venice! One of the most filmed (and photogenic) cities in the world, Venice has played host to hundreds of films through the history of the cinema.

Every film buff remembers the suggestive scenes of Indiana Jones and the Last Crusade set in Venice calli (narrow streets) and buildings, or the Doges Palace depicted in Orson Welles Othello. Joining the tour you will be able to visit the locations in which these scenes were shot and learn about the anecdotes, legends and stories related to the shootings and their protagonists.

If you like romance films, you can focus on the romantic scenarios you saw in movies like Anonimo Veneziano, Luchino Viscontis Senso or David Leans Summertime. On the other hand, if you are a Hollywood movies fan you will be able to walk the streets walked by Harrison Ford and Sean Connery in Steven Spielbergs Indiana Jones and the Last Crusade or visit the locations of the 2010 film The Tourist starring Hollywood stars Johnny Depp and Angelina Jolie.

Thanks to Venice rich history, costume drama is maybe the most common among the genres of the films that you will discover in the tour: big productions like The Merchant of Venice, starring Gerard Depardieu, and Casanova, portrayed by Academy Award winner Heath Ledger, were shot in the exclusive framework of Venice in recent years.

In the light of this, comes as no surprise that Venice is the city of the oldest film festival in the world, founded in 1932.

Discover real life city scenes immortalized by films such as Mambo, with Vittorio Gassman, the Italian comedy Honeymoon, and Woody Allen's wonderful musical Everyone Says I Love You.