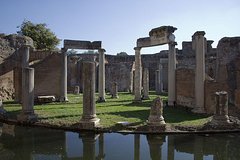 Wanted by the emperor Hadrian as his residence starting from 117 AD, the villa was built on the basis of a pre-existing building owned by his wife Vibia Sabina, which formed the first nucleus.
Built near the capital on the Monti Tiburtini, about 28 km from Rome, it could be reached either by via Tiburtina or via Prenestina, or by sailing the Aniene river.
The chosen area was rich in water and four of the ancient aqueducts that served Rome passed through it (Anio Vetus, Anio Novus, Aqua Marcia and Aqua Claudia). In its vicinity there is still the sulphurous water source of the Acque Albule (the odonten Bagni di Tivoli), known and much appreciated by the emperor.

Explore the ruins of the ancient Hadrian's Villa on this few-hour tour from Rome. Enjoy a breathtaking view of Rome while traversing the whole city to get to Tivoli city also known as the Thermal area and for the famous Travertine quarries.
entry tickets are not included.