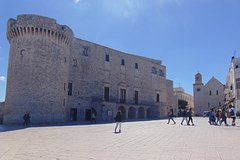 Private guided tour in the charming medieval town of Conversano, which preserves a historical and artistic heritage of considerable interest.

We will learn about the fascinating stories of the earls who turned the city into a very important center.

Departure from Piazza Castello, known as Largo di Corte, the highest point of the hill in a dominant position over the surrounding area.

Visit of the Basilica Concattedrale of Santa Maria Assunta, an interesting example of Romanesque Pugliese of which preserves the fourteenth-century facade.

Walk along the perimeter of the Castle to admire the external structure and the 4 towers still existing, including the most famous Renaissance cylindrical tower, today a symbol of Conversano.

We will visit the Municipal Art Gallery which houses the paintings of the cycle "La Gerusalemme Liberata" by Paolo Finoglio, made in the mid 1600s commissioned by the Counts Acquaviva of Aragon.

The interiors of the Church of San Cosma and Damiano, a Neapolitan baroque masterpiece, are painted almost completely by Finoglio.

Walking through the narrow streets of the medieval village of Conversano, we will also see some of the ancient gates and sections of the megalithic walls.

Meet your guide at Piazza Castello, also known as Largo di Corte, the highest point of the hill in a dominant position on the surrounding area.

Visit of the Cathedral of the Assumption of Mary, an interesting example of Apulian Romanesque style, which preserves the 14th century facade.

Castle and take a look at the 4 existing Towers, including the famous cylindrical Renaissance Tower, nowadays symbol of Conversano.

Then, we will visit the Art Gallery with the exhibition of the cycle of paintings "The liberated Jerusalem" by Paolo Finoglio, realized in the 17th century and commissioned by Earls Acquaviva of Aragon.

Almost completely painted by the Church of San Cosma and Damiano, masterpiece of Neapolitan Baroque.

You will be walking along the alleys of Conversano, old town center, and admire some gates of the ancient city and megalithic walls.