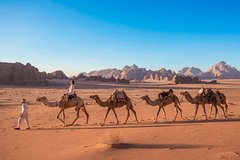 Make the most of your time in Jordan on a three-day tour from Amman and explore the ancient city of Petra, the spectacular desert landscape, the Wadi Rum Bedouin culture and the Dead Sea beaches. Accommodation and transportation are included in this tour. Visit the most prominent places in southern Jordan. See Petra, a UNESCO World Heritage Site. Sleep in a Bedouin camp in Wadi Rum. Jeep tour through the desert landscape. Swim, relax and float in the Dead Sea.

Stop At: Petra - Wadi Musa 77110 Jordan
Your driver will pick you up south, towards the Nabatean city of red roses in Petra, considered one of the wonders of the world. A city 139 miles (225 kilometers) from Amman that was carved in stone more than 2000 years ago to dominate the trade routes of ancient Arabia. Visit its villages, and water channels and enjoy a walk along the narrow siq, a road that is the main entrance to the city. The first thing you will see is the Khazneh, which is believed to have innumerable treasures. You will also see other monuments such as the Monastery and the Altar of Sacrifice.
Duration: 5 hours

Stop At: Wadi Rum Protected Area, Wadi Rum Jordan
Today, it will move towards Wadi Rum, called the Valley of the Moon, where the movie Lawrence of Arabia was filmed and lately The Martian. You will have a brief visit of Wadi Rum in a 4x4 Jeep. Wadi Rum is a massive mountain of unique form that rose between the pink red sand of the desert with imposing cliffs of several colors brown, reddish and golden.
You will spend the night in a Bedouin camp, in a quiet and quiet place, very exclusive while having a Bedouin style dinner and night activities (the camp consists of tents, with beds, blankets, bathrooms, dining room, all necessary for life, including electricity through the solar system).

Stop At: Dead Sea, Madaba Jordan
you will transfer to the Dead Sea which sits over 1300 feet (400 m) below sea level. The Dead Sea is one of the most incredible places in the world. It is known for the Biblical story of the destruction of Sodom and Gomorrah, which were destroyed by fire and brimstone. The Dead Sea speaks for itself: there are no living fish. It is by far one of Jordan's most impressive and spectacular places to visit. Its calm, shining water glowing from the scorching sun above, is known for the concentration of salt and minerals which makes it a therapeutic as well as a unique swimming experience not to be missed. Enjoy some free time to swim before returning to your hotel in Amman.