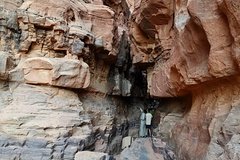 In this two hours jeep tour, you will have a chance to visit and see some of Wadi Rum historical and natural places. We will start this tour from Wadi Rum village. First, you will visit Lawrences spring. Then you will go to the dune where you will have the chance to walk on soft sand. The next phase is Khazali Canyon where you can walk through the canyon with a lot of ancient inscriptions. Then drive back to Wadi Rum village.

On a small hill in Rum village, are the limited ruins of a 2000-year-old temple, dedicated to the deity Lat. The ruins are important because they are evidence of a permanent Nabataean settlement, built on the earlier foundations of a temple built by the Arab tribe of Ad.

This spring, on the edge of the open sands, is a regular stop on the 4WD circuit. Look for a white water tank at the opening of Wadi Shallalah. After the tank, a path climbs the hill to the spring.

The spring was named in honour of Lawrences evocative description in the Seven Pillars of Wisdom: 'In front of us a path, pale with use, zigzagged up the cliff-plinthFrom between [the] trees, in hidden crannies of the rock, issued strange cries; the echoes, turned into music, of the voices of the Arabs watering camels at the springs which there flowed out three hundred feet above ground'.

Together with other springs in the area, this natural water spout that tumbles into a leafy paradise just five feet square allowed Rum to become an important waterhole for caravans travelling between Syria and Arabia. Look out for a small shrine dedicated to Lat, an aqueduct used to channel the water from the spring and inscriptions on the rock face. Notice too the aroma of mint in the air: it grows wild among the ferns and trees of this shady place.

An easy siq to explore is the narrow fissure that cuts into Jebel Khazali. You can explore on foot for about 150m, far enough to appreciate the cool shade and to see inscriptions made by the ancients who used the siq for the same purpose. Look out for drawings of ostriches, pairs of feet and a woman giving birth.

Khazali Sand Dune: Don't miss the opportunity to climb to the top of this soft red sandhill and slide down on the way back.