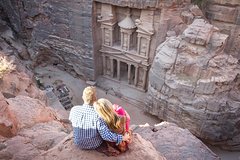 Explore Jordans natural wonders and ancient history on a 3-day, Private tour of Petra, Dead Sea, Mount Nebo, Amman, and Jerash. Travel by climate-controlled vehicle with an English-speaking driver as you explore Petras rock-cut architecture, soak up the mineral-rich mud of the Dead Sea and Visit St.Georges Church in Madaba and learn of the citys rich history. Enjoy panoramic views over the Jordan Valley from the top of Mount Nebo, Discover the Roman Antiquities of Jerash and Amman

Stop At: Petra - Wadi Musa 77110 Jordan
Experience Petra day tour from Amman. Your tour driver will pick you up from your hotel in Amman. Then drive 3 hours towards the Red Rose City of Petra, the biggest attraction of Jordan. At the visitor center you driver will guide you to the ticket counter and to a local guide that you can hire for your tour. Petra was first established around the 6th century B.C. by the Nabataean Arabs, a nomadic tribe who settled in the area and laid the foundations of a commercial empire that extended into Syria. Upon arrival you will begin the trip on horseback to the canyon, the so called Siq, and then by foot to the most beautiful monument: the Treasury. Among other monuments you will see are the Street of Facades, the Royal Tombs and Pharaohs Castle. Petra was also chosen to be one of the New 7 Wonders of the world. After the visit is finished, we will drive you back another 3 hours to your hotel in Amman after enjoying a day trip to Petra from Amman, Jordan.
Duration: 12 hours

Stop At: Dead Sea, Madaba Jordan
Our driver will pick up you from your hotel in Amman. Proceed to Madaba, one of the most memorable places in the holy land, which is known as the "the City of Mosaics." Madaba offers many sites to explore, amongst them, the chief attraction in the contemporary Greek Orthodox Church of St. George, is a wonderfully vivid, 6th century Byzantine Mosaic Map showing Jerusalem, the Nile River, the Dead Sea, and other holy sites . Continue to Mount Nebo, one of the most revered holy sites of Jordan, and the place where Moses was buried. A small Byzantine church was built there by early Christians, and if you stand on the platform in front of the church, you can admire the view. It overlooks the Jordan Valley and the Dead Sea across to the rooftops of Jerusalem and Bethlehem and is absolutely breathtaking. Finish the tour with free time at the Dead Sea. The lowest point on earth, is over 400m (1,312 ft.) below sea level. It is one of the most spectacular natural and spiritual landscapes in the world. It is the best place for floating and relaxation without exerting any effort. The leading attraction at the Dead Sea is the warm, soothing, super salty water itself  ten times saltier than normal sea water, and rich in chloride salts of magnesium, sodium, potassium, bromine and several others. This tour ends back in Amman at your hotel.
Duration: 8 hours

Stop At: Jerash Ruins, Jerash Jordan
Begin with pickup from your Amman hotel. Hop inside your private, air-conditioned car, and take in Jordans craggy landscapes as you make the approximately 31-mile (50-kilometer) journey north to Jerash. Often called the Pompeii of the East for its well-preserved ruins, Jerash was built by Alexander the Great around 331 BC. The city prospered after Roman conquest in 63 BC, and was later named one of the 10 great Decapolis cities of the east. On arrival, explore independently or with a local guide (depending on option selected). Stroll around highlights such as Hadrian's Arch, built in 130 AD to celebrate a visit by the Emperor Hadrian, and the Hippodrome, a sporting arena that held 15,000 spectators. See the Forum with its stunning Oval Colonnade, and admire the Temple of Artemis, with its 39-foot (12-meter) Corinthian columns. Amble down the Colonnaded Street and take photos of the Nymphaeum, the citys ornamental fountain. Then, travel back to Amman to views the citys major classical treasures. Head up to Amman Citadel and walk around the hilltop collection of Roman, Byzantine, and early Islamic ruins. See the remains of the Roman Temple of Hercules, dating from the 2nd century, and check out the Umayyad Palace, a crumbled complex of royal buildings originating from the 8th century. Visit the Archaeological Museum to view its displays of classical and Islamic finds from across Jordan, and then drive into downtown Amman to view the stunning Roman Theater. Take in the steeply raked terraces of this magnificently restored, 2nd-century theater that once seated about 6,000 people. Finish with a closer look at Ammans traditional souks before your tour concludes with a drop-off back at your hotel.
Duration: 8 hours