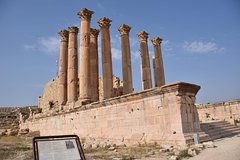 Stop At: The Baptism Site Of Jesus Christ, Al-Maghtas Jordan
Al-Maghtas, meaning "baptism" or "immersion" in Arabic, is an archaeological World Heritage site in Jordan on the east bank of the Jordan River, officially known as Baptism Site "Bethany Beyond the Jordan". Travelers will spend around two hours on the site - Guide is provided by the site.
Duration: 2 hours

Stop At: Dead Sea Region, Dead Sea Region
The Dead Sea is a salt lake bordered by Jordan to the east and Israel and the West Bank to the west. It lies in the Jordan Rift Valley, and its main tributary is the Jordan River. Its surface and shores are 430.5 metres below sea level, Earth's lowest elevation on land. Jordan travelers suppose to spend around 2 hours at one of the Private resorts (Entry fees are NOT included).
Duration: 2 minutes

Stop At: Mount Nebo, Madaba Jordan
Mount Nebo is an elevated ridge of the Abarim in Jordan, approximately 710 metres above sea level. It is mentioned in the Hebrew Bible as the place where Moses was granted a view of the Promised Land.
Duration: 30 minutes

Stop At: Madaba, Madaba, Madaba Governorate
Quick stop at one of Madaba Mosaic work shop to have a closer look and how the locals do the Mosaic works - Hand made from natural color stones.
Duration: 30 minutes

Stop At: Madaba Mosaic Map, Inside St. George's Church, Madaba Jordan
The Madaba Map, also known as the Madaba Mosaic Map, is part of a floor mosaic in the early Byzantine church of Saint George in Madaba, Jordan. The Madaba Map is of the Middle East, and part of it contains the oldest surviving original cartographic depiction of the Holy Land and especially Jerusalem.
Duration: 1 hour

Stop At: The Citadel, K. Ali Ben Al-Hussein St. 146, Amman Jordan
The Amman Citadel is a historical site at the center of downtown Amman, the capital of Jordan. The L-shaped hill is one of the seven hills that originally made up Amman. Evidence of occupation since the pottery Neolithic period has been found and the hill was fortified during the Bronze Age.
Duration: 1 hour

Stop At: Amman, Amman, Amman Governorate
Amman's Roman Theatre is a 6,000-seat, 2nd-century Roman theatre. A famous landmark in the Jordanian capital, it dates back to the Roman period when the city was known as Philadelphia.
Duration: 30 minutes

Stop At: Jerash Ruins, Jerash Jordan
Jerash is a city in Jordan, north of the capital Amman. Inhabited since the Bronze Age, its known for the ruins of the walled Greco-Roman settlement of Gerasa just outside the modern city. These include the 2nd-century Hadrians Arch, the Corinthian columns of the Temple of Artemis and the huge Forums oval colonnade. The Jerash Archaeological Museum displays artifacts excavated from the site.

Stop At: Ajloun Castle, Ajloun National Park, Jerash 26173 Jordan
Ajloun Castle, is a 12th-century Muslim castle situated in northwestern Jordan. It is placed on a hilltop belonging to the Mount Ajloun district, also known as Jabal 'Auf after a Bedouin tribe which had captured the area in the 12th century.
Duration: 1 hour

Stop At: Petra - Wadi Musa 77110 Jordan
Petra is a famous archaeological site in Jordan's southwestern desert. Dating to around 300 B.C., it was the capital of the Nabatean Kingdom. Accessed via a narrow canyon called Al Siq, it contains tombs and temples carved into pink sandstone cliffs, earning its nickname, the "Rose City." Perhaps its most famous structure is 45m-high Al Khazneh, a temple with an ornate, Greek-style facade, and known as The Treasury.

Stop At: Wadi Rum, Wadi Rum, Al Aqabah Governorate
Moving afternoon toward Wadi Rum and spend the night in a Bedouin camp in Wadi Rum (You wont imagine or believe that the desert can be so beautiful till you see it with your eyes).
Duration: 16 hours

Stop At: Wadi Rum, Wadi Rum, Al Aqabah Governorate
Wake up early morning and take a jeep tour at Wadi Rum with the Bedouins on their cars / truck for two hours - this is the minimum reconmended activity at Wadi Rum
Duration: 2 hours

Stop At: Aqaba, Aqaba, Al Aqabah Governorate
Aqaba is a Jordanian port city on the Red Sea's Gulf of Aqaba. Inhabited since 4000 B.C., it's home to the Islamic-era Aqaba Fort. Its beach resorts are popular for windsurfing and other water sports, and the area is a top destination for scuba divers, with notable dive sites including the Yamanieh coral reef in the Aqaba Marine Park, south of the city.