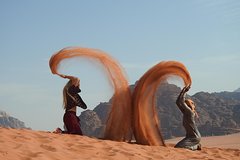 Enjoy a 5-day tour that covers Amman city, Jordan Desert Castles, Baptism site, Madaba city & Churches, Mount Nebo, Jerash, Ajloun Castle, Petra, Wadi Rum, Red Sea at Gulf of Aqaba (During summer season only) and the Dead Sea. Spend three nights in Amman including breakfast. Also sleep overnight at a Bedouin camp at Wadi Rum including dinner and breakfast. Entrance fees and local guide services at each attraction are NOT included.NB: Aqaba city on the Red sea is skipped in winter time due to short day light ( November to end of March). This tour can be a private or Small Group Tour, kindly READ the small Group Tours conditions and limitations.

08:00 Hotel Pick up and starting of the Desert Castles .

14:00 Visiting of Roman theater & the museum

Stop At: Petra - Wadi Musa 77110 Jordan
Morning departure from Amman via the desert high way to Petra  Wadi Mousa and start Petra tour by passing the marvelous Siq reaching The Treasury, and moving afterwards toward the Theater and later to The Monastery which is beautifully carved, though much less decorated than the Treasury, and so huge that even the doorway is several stories tall - So you would actually be able to cover those two main trails on Petra in around 4-5 hours of walking, and Moving afternoon toward Wadi Rum and spend the night in a Bedouin camp inside Rum reserve (You wont imagine or believe that the desert can be so beautiful till you see it with your eyes).
Duration: 12 hours

No meals included on this day.
Accommodation included: One night sleep at a basic style Bedouin camp inside Rum reserve with dinner and breakfast.

Stop At: Wadi Rum Protected Area, Wadi Rum Jordan
7:00 am: Having breakfast at the camp. 8:00 am: Starting morning Jeep tour (In Bedouins truck) and visiting some of the amazing places at Wadi Rum. 10:00 am: Moving toward Gulf of Aqaba and visiting the public beach. 1:00pm: Moving toward Dead Sea and enjoying the beach and floating at Dead Sea area. At6:00 pm: Leaving back to Amman 7:00 pm: Home/Hotel drop off (Time might differ a little because day light is shorter in winter time)

Aqaba city on the Red sea is skipped during winter season ( Nov to March ) due to short day light.
Duration: 12 hours