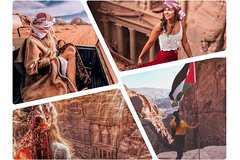 Depart Amman North to Ajlun Castle, an Islamic fortress which is a mere 16 km from Jerash. The castle is located on the top of a mountain just outside the small city of Ajlun. It is an interesting maze of passages and levels, and offers a wonderful view of the surrounding area, northwestern Jordan, and off into Galilee. Continue to the ruins of Jerash, one of the Middle East's best examples of a Greco-Roman provincial city. At the entrance of the site, admire Hadrian's Arch, built in 129 AD to mark Emperor Hadrian's visit, and the Hippodrome, a partially restored Roman-era stadium. Once inside, accompanied by a private, local guide, wander the colonnaded streets and discover its most important monuments: Temples, Theaters, Baths, Oval Plaza, along with several Byzantine churches dating from the Christian era. Return to Amman.

The marvels of nature and the genius of medieval Arab military architecture have given northern Jordan two of the most important ecological and historical attractions in the Middle East: the sprawling pine forests of the Ajlun-Dibbine area, and the towering Ayyubid castle at Ajlun, which helped to defeat the Crusaders eight centuries ago. Locals often take advantage of the green landscapes of Ajlun to take a break from city life and connect with nature.

Jerash is an amazing blend of Greco-Roman and Oriental influences. A great place to visit during the spring with its beautiful rolling hills and lush greenery, Jerash has a rhythm not seen anywhere else in Jordan. Also, every year Jerash hosts the Jerash Festival of Culture and Arts, a three week summer program filled with folk dance, music, and theatrical performances.

Special Offer - Book by February 21 to save 5% off our previously offered price! - Book Now!