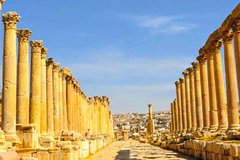 Discover the beauty of Amman by visiting Amman citadel, Roman theatre and get the the experience to live like a local by walking through the streets and markets of the Downtown. Discover ancient civilizations from the Roman Empire and beyond. Wander through the streets of Jerash, widely considered among the best-preserved of all the worlds ancient Roman cities. Admire plazas, temples, theaters and colonnaded avenues once abuzz with life under Roman rule. Visit Ajloun Castle which is one of the greatest examples of Islamic Ayyubid military architecture.

*Pick up from your accomodation in Amman
*Your tour will start off by going to Ammans Citadel which is situated on a mountain in central Amman. Known for being one of the oldest continuously inhabited places, this first stop will give you a glimpse over the capital before going to Amman-Downtown. Known as Al-Balad by the locals, you will get to see the different & various markets and ancient Souks. Ending this tour will be the visit of the most obvious and impressive remnant of its Roman past. The Roman theatre that was built at the time Amman was known as Philadelphia (around 106AD).

Then we will take you to Jerash, known for its well preserved Roman cities. You will get to experience the impact & influence left by the Greco-Roman eras in the Mediterranean basin and the deeply rooted Arab traditions preserved by the local people. And if youre lucky youll get to enjoy a historical reenactment of gladiators & chariot race.

*Our last stop will be in Ajloun. Where we will visit The Castle of Ajloun. Which is a 12th century Muslim Castle situated in northwestern Jordan.
*Head back to Amman