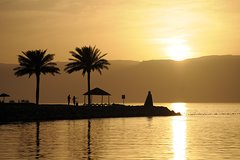 Aqaba is characterized by diversity of different civilizations, through us will be able to see Aqaba as seen by local people who are characterized by their generosity and customs distinctive.
I hope you enjoy this experience.

Stop At: Aqaba Castle, next to the Aqaba Flagpole, Aqaba Jordan

Every corner in Aqaba tells a tale. The Aqaba Fort offers a glimpse into Jordan's history. It dates back to the region of the Mamluke Sultan Qanswah el-Ghawri (1501-1517 AD). The fort was used and renovated during many historical dynasties from the Mamluks themselves to Ottomans.

The city was rediscovered and excavated in 1989, inscribed in fortified stone walls 165m x 140m, with a thickness of 2.6m. it was surrounded by 24 towers that were positioned around the city in a u-shape. Two main streets ran through the city and met in the middle, dividing it into four sections. Each section had gate, the Northern gate come from Egypt, the Eastern gate was the Damascus gate, Hejaz gate on the south and the western gate led to the sea, making it vital as a trade route and connection between the Mediterranean Sea and Arabian Peninsula.