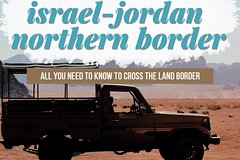 We offer all our services with modern, air-conditioned and comfortable vehicles, a private and not public journey. The vehicle is usually medium-sized and accommodates up to four people with small-sized bags. However, we would prefer the maximum during booking to be three persons for a more comfortable journey. However, if the number becomes four, it will reduce their freedom while sitting and especially if the flight is limited to 3-4 hours and this is on their personal responsibility. Most of our vehicles provide free water, juice and Internet. The driver is a tactful, good-looking person who speaks English and provides assistance when needed.

Sheikh Hussein Bridge or the Jordan River crossing (Hebrew: מעבר נהר הירדן) is one of the two crossings on the borders of Jordan and Israel. Called the "Sheikh Hussein Bridge" relative to Sheikh Hussein Abdulhadi from Arabeh (Jenin) who built the bridge to cross the pilgrims to Jordan. One of the events was the Battle of Sheikh Hussein between the Jordanian army and the Israeli army on 30 April 1966, after which King Hussein bin Talal imitated the medal of independence of the leader of the Mohammed al-Waqf and upgraded it exceptionally in the field.

Visitors with a valid passport may obtain a visa at any Jordanian embassy, consulate, or legation abroad. You can also obtain a visa upon arrival at Ammans Queen Alia International Airport or at any other border crossing (except the King Hussein Bridge (Allenby Bridge) and the ferryboat from Egypt). Visa fees are 40 JDs ($56) for single entry valid for one month but easily extended at the nearest police station, or 120 JDs ($170) for multiple entries, valid for six months and non-extendable, to be paid in local currency. Few formalities need to be observed when departing Jordan: A departure tax of 8 JDs ($13) is paid at any border crossings except the airports

Special Offer - Book by January 31 to save 12% off our previously offered price! - Book Now!