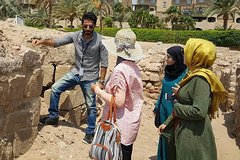 Aqaba on foot is a 3-hour cultural tour that you will travel through the civilizations that passed through Aqaba, Visiting religious sites, tasting traditional cuisine and getting acquainted with the craft of the ancient inhabitants of Aqaba. And learn about the story of building the city of God "Ayla" that was built by Muslims and Christians to became Aqaba later.

Stop At: Aqaba Castle, next to the Aqaba Flagpole, Aqaba Jordan

The fort was part of the pilgrimage stops aligning the Northern Way (Darb Al-Sham).Larger than the other forts, considering its location at the Red Sea. Pilgrims and travelers would flock to the area seeking safety and lodging within the gates of the fort, which offered compartments and accommodation for passers-by.

The fort was designed in a rectangular 56.5m x 58m shape, with towers protruding from the corners, from the middle of the northern side stood the two-towered gatehouses. The towers where structured with around internal space, and a polygonal exterior. However, with time they were rebuilt to take an overall rounded structure.

The house was built in the style of Hijaz houses. Tourists are welcome to visit and discover the history and legacy of the triumphs achieved during the Great Arab Revolution. It displays a collection of rifles, copper and silver bowls, coffee pots and mills, Mansaf trays (to display Jordans traditional mutton and rice dish) and other typical items of the period.

From this growing Christian scene came one of the most exciting discoveries in recent times, where archaeologists in Aqaba have unearthed what they believe to be the worlds oldest church, from the late 3rd Century AD. It is slightly older than the Church of the Holy Sepulcher in Jerusalem and the Church of Nativity in Bethlehem, both of which date back to the 4th Century. It has since been back-filled with earth for protection.

Aqaba church, a mud-brick building with traces of dipinto that could have represented a procession of figures, would be slightly more ancient than any of the known public meeting church buildings. It is also unique because of it subsequent history.