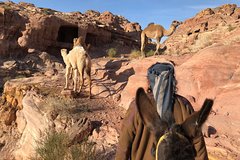 Petra was the capital of the ancient Nabatean kingdom, whose monarchs made it prosper due to its location on the caravan route. Its name derives from the Greek πέτρα (stone), because it is a city literally excavated and sculpted in stone. Numerous buildings, whose facades are directly sculpted in the rock, form a unique monumental ensemble in the world.

My name is Abu Noura, and I want to introduce you to my people, the Bedouins, who inhabited the city of Petra until in 1984, when we moved to protect the archaeological heritage. Many of us keep the caves where our parents and grandparents were born and grew up. They are caves with carved facades, with classic lintels, similar to those that can be seen along the tourist itineraries.

A camel ride around Petra, climb the mountains, a bedouin dinner and a tea, sleep in one of our caves and a breakfast at dawn and see how illuminates Petra Mountains in pink, is a unique experience can I offer to you.

Day 1: Tour in the ancient city, up at the snake monument, bedouin tea and dinner, sleep in the cave

Stop At: Petra - Wadi Musa 77110 Jordan
camel ride through the ancient city of Petra, climb to the monument called the snake, above a mountain
Duration: 3 hours

Meals included:
• Dinner: Bedouin dinner: maklouba ("up and down" in arabic); mensaf or meat and vegetables in papillote, and a bedouin tea.
Accommodation included: Sleep in a bedouin cave, where our parents were born, similar to those that can be seen along the archeological site.

Stop At: Little Petra, North of Petra, Petra - Wadi Musa Jordan
Foirst we go to the other site of the Monastery place, a higest monument in ancient city of Petra. Than we can visit Little Petra, a ancient city smaller than the big Petra. On this site we will be able to see the remains of the polychrome in the caves.
Duration: 3 hours

Meals included:
• Breakfast: A bedouin breakfast in the morning, at dawn and see how illuminates Petra Mountains. I can offer you also a lunch
Accommodation included: You can spend another night in the cave if you wish. In this case, I'll do a dinner for you also