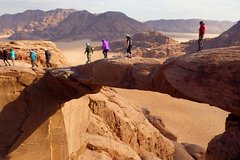 An ideal vacation for those travelers who want to see the highlights in Jordan and experience an active holiday! Visit Amman, the Decapolis cities Umm Quais and Jerash, travel along the ancient Kings Way, spend the night in a Little Petra Camp, hike to the imposant Monastery El Deir in Petra, ride camels in Wadi Rum desert, enjoy nature while walking in Dana and end the tour with a stay at the Dead Sea.

Day 1: Amman Airport - Hotel in Amman
Our representative welcomes you with a signage at Amman Airport after you passed through the customs. Transfer about 30 minutes to your Amman Hotel, check in, remainder of the day free.

Day 2: Amman Hotel - Amman City Tour - 3 Desert Castles - Amman Hotel.
Start the day with a city tour in Jordan's capital. Amman, already mentioned in the Bible as Rabbath Ammon, is a bustling modern city. The historical places are located in downtown, where we visit the Citadel with remains from the Roman to the early Islamic period. Then we have a round in the Archaeological Museum. We stroll via the Souq, where you get an idea of everyday life, to the Roman Theatre from 2nd century with 6000 seats. Then to the Desert Castles in eastern Jordan. The Amra Castle adorns with its zodiac dome and the early examples of Omayyad fresco paintings, and there are still the fortress-like mysterious Qasr Kharanah and the black basalt Roman/Medieval Islamic fort at Azraq. Back in Amman enjoy Overnight Amman hotel.

Day 3: Amman Hotel - Umm Quais - Jerash - Amman Hotel.
08:00 we drive two hours from Amman to Gadara (Umm Qais), which belonged to the famous Decapolis, a union of 10 cities, founded by Alexander the Great. Here you have an overwhelming view over the north Jordan Valley, the Golan Heights and the Sea of Galilee. We leave to Jerash, the best example of a Roman provincial city in the whole Middle East. Visit the spectacular forum, Roman colonnaded street, the Nymphaeum and the Temple of Artemis. Back to Amman for overnight.

After breakfast travel to Madaba, where to find the famous mosaic 6th century map of Palestine in St. Georges church. Then to Mt. Nebo, the place where Prophet Moses gazed at the Promised Land before he died. You visit the old monastery and overlook the Jordan Valley, Dead Sea and parts of the Holy Land. Not far you find the Dead Sea Panorama Complex, where you enjoy the views and learn about the Dead Sea area in the museum. Driving along the famous ancient caravan route the King's Way, we have a short stop in Wadi Al-Mujib, a great wide valley with magnificent geological formation. In Kerak visit the famous Crusader castle built in 1132/34 by King Baldwin I. of Jerusalem. Dinner and overnight at a camp in Little Petra.

Early breakfast, then start to the Monastery El Deir. From the bizarre landscape of Little Petra we cross the Baida region towards the Petra gorges to arrive at the Monastery, high above the main site. Enjoy the views of the Rift Valley of Wadi Araba as we walk. Overnight Petra hotel. Note: You need a minimum average fitness level to do this part of the tour.

After breakfast to the red rose city Petra, the biggest attraction of Jordan. Petra was first established around the 6th century B.C. by the Nabataean Arabs, a nomadic tribe who settled in the area and laid the foundation of a commercial empire that extended into Syria. With the guide pass the canyon, the so called Siq, to see the most beautiful monument: the Treasury. Continue via the Street of Facades to the Royal Tombs and Pharaoh's Castle. After that, free time to explore Petra on your own. Overnight Petra.

07:45 pick up hotel, travel 1.5 hours southwards to the protected area of Wadi Rum, one of the most impressing desert landscapes in the world. About 9:30 meet your guide and the camels and start to ride towards the red sand dunes through Rum and Um Ishrin valleys. On the way you will have a stop at Lawrence's spring. After having a look at the Nabatean inscriptions in Anfashiyeh you will leave camels and camel guide to cross a sand dune, where a jeep will join you for a lunch and rest in the shade of the mountain. In the afternoon, you will use the jeep to visit natural rock bridges in Jebel Burdah and Um Fruth. You will have the opportunity to climb the latter if you wish so. You will then walk through Abu Khasheba canyon. Your guide will wait for you at the end of the canyon, and drive you to the sunset place before going to our camp for dinner and overnight.

Today our journey takes us to Dana Nature Reserve, Jordan's largest reserve with a diverse flora and fauna, consisting of mountains and wadis. From the village, inhabited since more than 400 years by Bedouins we start a short hike about 2 hours. Transfer to your Dead Sea hotel - With 400 meters below sea level, the Dead Sea is the lowest point on earth, where ever since the days of Herod the Great, people have flocked to in search of its curative secrets. The area is characterized by high annual temperatures, low humidity and high atmospheric pressure, the air is extremely oxygen rich. With the highest content of minerals and salts in the world, the Dead Sea water possesses anti-inflammatory properties, and the dark mud found on its shores have been used for over 2000 years for therapeutic purposes.