Day Tour to Jerash and Amman City Tour From Amman 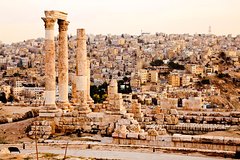 Day Tour to Jerash and Amman City Tour From Amman

It is the grandeur of Imperial Rome being one of the largest and most well-preserved sites of Roman architecture in the World outside Italy, its paved and colonnaded streets, soaring hilltop temples, handsome theaters, spacious public squares and plazas, baths, fountains and city walls pierced by towers and gates remain in exceptional. In Jerash you will visit Hadrians Arch, Oval Plaza, The Cathedral, The North & South Theater, and The Nymphaeum.

You will be transferred back to Amman.

You will visit the Roman Theatre , Amman Downtown , Amman Citadel and you may have free time by yourselves in Amman downtown .The Amman City Tour is a self guided tour with your driver transferring you to each site.

You can choose if you would like to have lunch in Jerash or in Amman Downtown.

You will be transferred back to your hotel in Amman

Explore Jordans Roman past and present-day capital on this 6-hour private trip to Jerash, with a panoramic tour of Amman. Start at classical Jerash, a crumbled Greco-Roman city dubbed the Pompeii of the East. With a local guide, view the well-preserved monuments, including the Oval Plaza, Hippodrome, colonnades and paved streets as you hear about this ancient Decapolis city. Then, take a panoramic tour of Ammans top attractions including the Citadel viewpoint, the downtown souks, and views of the city's mosques..