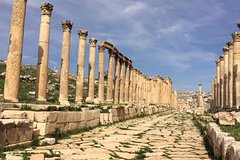 Explore two of Jordans most important historical sites with this day trip to Jerash and Amman City Tour. The most complete and well preserved city of the Roman Empire.

Jerash is one of the Decapolis cities to the north of Amman. During the Roman Empire it was often called Pompoeii of the East, which indicates the great example of Roman urbanization. A journey through time walking its streets, theaters, temples and places among the great colonnade, the Arc de Triumph, the Oval Plaza and the temples of Zeus and Artemis.

Tour the downtown part of capital city Amman for 2 hours, visiting sites and museums including the Archeological Museum, the Folklore Museum, The citadel and the Amphitheatre. Everywhere you look there is evidence of the city's much older past