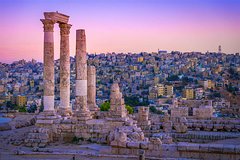 Enjoy our Amman Tour to have the chance to spend your time visiting Amman's must-see City sightseeing like Amman Archaeological Museum, Citadel, and the Roman Amphitheater then experience Amman's downtown walk and shopping.

Your Tour Manager will pick you up from your Hotel in Amman to start your Amman City Tour.First you are going to have a Hishem restaurant breakfast after that you will Visit the King Abdullah Mosque which was completed in 1989 as a memorial by the late King Hussein to his grandfather. The unmistakable blue-domed Mosque can house up to 7000 worshippers inside. This is the only Mosque in Amman that openly welcomes non-Muslim visitors. Then pay a visit to the Amman Citadel located 132 meters above the level of the City Centre. South of the castle we can still see the ruins of Hercules temple. Also, there is Umayyad palace. The adventure continues then with exploring the Roman Amphitheater which is considered one of the largest in the Middle East. Its construction dates back to the beginning of the Second Century AD. Then take a walk in Amman's downtown markets and City center before heading to the Archaeological Museum and Darat al Fnoun which aims to provide a platform for the visual arts from the Arab World. Back to your Hotel in Amman. Duration is about 8 Hours.