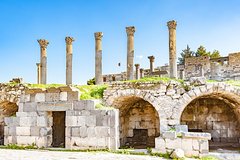 Pick up from your hotel in Amman and transfer 48 km north of Amman to visit Jerash, which is nestled in a quiet valley among the mountains of Gilead.

It is the grandeur of Imperial Rome being one of the largest and most well-preserved sites of Roman architecture in the World outside Italy, its paved and colonnaded streets, soaring hilltop temples, handsome theaters, spacious public squares and plazas, baths, fountains and city walls pierced by towers and gates remain in exceptional. In Jerash you will visit Hadrians Arch, Oval Plaza, The Cathedral, The North & South Theater, and The Nymphaeum.

Then transfer a short distance through a beautiful pine-forest and olive groves, reaching the city of Ajloun, here you will find Al-Rabid Castle; the 12th century Castle built by one of Saladins lieutenants in the campaign against the Crusaders.

You will be transferred back to Amman.

Are you looking for a Private Amman Tour to Jerash and Ajloun? Enjoy this Jerash and Ajloun Day Trip from Amman and see incredible Roman and Crusader era ruins, visit the Roman city of Jerash where you can still see the Forum intact today. Move on the Ajloun to see the 12th century castle built by Saladin to defend Jordan from the Crusaders..