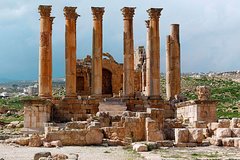 Depart Amman North the ruins of Jerash, one of the Middle East's best examples of a Greco-Roman provincial city. At the entrance of the site, admire Hadrian's Arch, built in 129 AD to mark Emperor Hadrian's visit, and the Hippodrome, a partially restored Roman-era stadium. Once inside, accompanied by a private, local guide, wander the colonnaded streets and discover its most important monuments: Temples, Theaters, Baths, Oval Plaza, along with several Byzantine churches dating from the Christian era. Return to Amman.

Drive 50 km in the north to Jerash, the well preserved city of the Roman Empire, often called Pompeii of the East. Initially built by Alexander the Great, the town started to prosper after the Roman conquest, and was one of the Decapolis cities in northern Jordan. Visit Hadrian's Arch, built in 130 AD to honor the visit of Emperor Hadrian. Pass the Hippodrome offering space for 15,000 spectators, the impressing Forum, continue to the Temple of Artemis, which columns are 12 meters high and each drum weights 20-40 tons. Other highlights are the Colonnaded Street and the Nymphaeum. Back in Amman visit the Citadel hill with remains of the Hercules Temple and the Umayyad Palace as well as the Archaeological Museum. In downtown we see the large Roman Theatre from 2nd century and the traditional souks. Return transfer to Amman.

Jerash is an amazing blend of Greco-Roman and Oriental influences. A great place to visit during the spring with its beautiful rolling hills and lush greenery, Jerash has a rhythm not seen anywhere else in Jordan. Also, every year Jerash hosts the Jerash Festival of Culture and Arts, a three week summer program filled with folk dance, music, and theatrical performances.