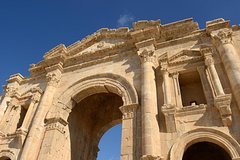 Full-day private trip to Jerash and Ajloun Castle from Amman
Travel north to Jerash, sometimes called the Pompeii of Asia'
Stroll around the Roman ruins to see the Oval Plaza, Temple of Artemis, and more
Visit 12th-century Ajloun Castle, built by Saladin's army to defend against the Crusaders
Admire the medieval Islamic architecture and views of the Jordan Valley
Explore the sites independently or choose to hire local guides (own expense)
Private air-conditioned transport with driver, plus Amman hotel pickup and drop-off included; with entrance fees at own expense

Following pickup, your first stop will be at Jerash, located about an hour north from the city center of Amman and considered one of the largest and most well-preserved sites of Roman architecture in the world outside of Italy. Jerash, conquered by General Pompey in 63 BC, fell under Roman rule and was one of the 10 greatest Roman cities.
Once in Jerash, your driver will assist you to prepare your entrance and book a private local guide (optional, at own expense). You will have the opportunity to explore the colonnaded streets, baths, theaters, plazas and arches of Jerash. There will be a lot of walking, but it will be well worth the stroll, so make sure you wear comfortable walking shoes on the day of the tour.

Next, you will be driven to Ajloun Castle, which was built in 1184 AD by one of Saladins generals. The castle became important in the defense against the Crusaders. The castle is one of the best preserved examples of Medieval Arab-Islamic military architecture. The Castle tour is a walking tour on your own. After Ajloun Castle, you will meet your driver at the entrance. Your tour will conclude with drop-off at your hotel or accommodation.