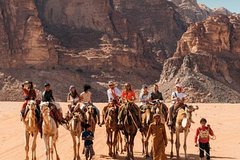 Make a hot deal and visit Jordan! This private tour takes you from the north to the south, revealing the highlights of our beautiful country. Start with a city tour in the capital Amman, relax at the Dead Sea beach, drive to the north to visit the Roman city of Jerash, continue to Madaba and Mount Nebo, drive along the King's Way and be enchanted by the rock city Petra.

Day 1: Arrival Amman Airport - Amman Hotel
Upon arrival to Queen Alia Airport our representative will meet you after you exit the customs. Transfer about 30 minutes to Amman hotel, check in, remainder of the day free.

Day 2: Amman Hotel - Dead Sea Beach - Amman City Tour - Amman Hotel
Drive 1.5 hours to the lowest point on earth, the Dead Sea, where you have leisure time at the beach and the chance to float on salty waters (showers and locker rooms are available). Back in Amman we discover the historical places in downtown. The Citadel hill with remains from the Roman to the early Islamic period, like the Umayyad Palace, enjoying views over hilly Amman and the Roman Theatre. We stroll via the Souq, where you get an idea of everyday life, and Jabal Amman with its distinctive early 20th century architecture. Overnight Amman hotel.

Day 3: Amman Hotel - Umm Quais - Jerash - Ajloun Castle - Amman Hotel
Morning time we drive two hours from Amman to Gadara (Umm Qais), which belonged to the famous Decapolis, a union of 10 cities, founded by Alexander the Great. Here you have an overwhelming view over the north Jordan Valley, the Golan Heights and the Sea of Galilee. We leave to Jerash, the best example of a Roman provincial city in the whole Middle East. Visit the spectacular forum, Roman colonnaded street, the Nymphaeum and the Temple of Artemis. Next stop is Ajloun the great 12th century Islamic castle built around 1184/85 by the famous Islamic leader Salah al-Din. Back to Amman for overnight.

Day 4: Amman Hotel - Madaba - Mt Nebo - Shobak Castle - Petra Hotel
After breakfast drive to the town Madaba and view the famous mosaic 6th century map of Palestine in St. Georges church. Short ride to Mt. Nebo, the place where Prophet Moses gazed at the Promised Land before he died. You visit the old monastery and overlook the Jordan Valley, Dead Sea and parts of the Holy Land. Driving along the famous ancient caravan route the King's Way, we have a short stop in Wadi Al-Mujib, a great wide valley with magnificent geological formation. In Shobak visit the famous Crusader castle built by King Baldwin I. of Jerusalem. Continue to Petra hotel, check in and overnight.

Day 5: Petra Visit - Amman Hotel
After breakfast to the red rose city Petra, the biggest attraction of Jordan. Petra was first established around the 6th century B.C. by the Nabataean Arabs, a nomadic tribe who settled in the area and laid the foundation of a commercial empire that extended into Syria. With the guide pass the canyon, the so called Siq, to see the most beautiful monument: the Treasury. Continue via the Street of Facades to the Royal Tombs and Pharaoh's Castle. The guide says farewell to you at the restaurant area; free time to explore Petra on your own and return the same way to the entrance gate. Overnight Amman hotel.