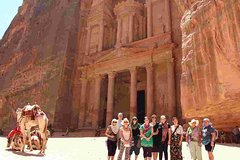 Pass By: Amman, Amman, Amman Governorate
Your amazing trip to the land of mesmerizing beauty begins as you arrive at Queen Alia Airport. Our representative will be waiting after Immigration and Customs to assist and escort you to your hotel. As the capital of Jordan, Amman is a fascinating city of contrasts, a unique blend of old and new, ideally situated on a hilly area between desert and the fertile Jordan Valley.Amman offers plenty of lively nightlife, with everything from cultural to traditional Arabic entertainment, modern restaurants and night clubs.No activities or meals are included on your first day. However, if you arrive early, there are a few excursions around Amman you may be interested in.

No meals included on this day.
Accommodation included: Overnight in Amman Hotel including breakfast

Stop At: Ajlun, Ajlun, Ajlun Governorate
Exciting guided tour of the spectacular Greco  Roman city of Jerash and the Crusaders Castle of Ajlun.

Today you will visit the Crusaders Castel of Ajlun : In north Amman, Ajlun has several sights to see, including the towering Arab Islamic Castle. The history of Ajloun Castle made it one of the most important attractions of the Middle East. The castle was built by Saladins General in 1184 AD to protect and control the iron mines of Ajlun. It dominated the main routes of the Crusaders in the Jordan valley and protected the trade routes of Jordan. The castle is a fine example of Islamic architecture and dominates a wide stretch of the northern Jordan valley. It was built 1250 meter above the city on top of a hill. The view from the top of the castle is breathtaking and, during a clear day, you can see as far as Dead Sea.
Duration: 2 hours

Stop At: Jerash, Jerash, Jerash Governorate
Later, you will visit the ancient Greco Roman city of Jerash : After visiting Ajlun, we head east to visit the spectacular site of the ancient Greco Roman city of Jerash. The guide will escort you through this amazing site and impress you with facts of Jerash. This well preserved site is 2000 years old, yet the ruins are in excellent shape. It was hidden for centuries in sand before being excavated and restored over the past 70 years. Jerash reveals a great example of the extensive and formal Roman urbanization that can be found throughout the Middle East. The city is comprised of paved and colonnaded streets, soaring hilltop temples, beautiful theatres, spacious public squares, baths, fountains and city walls pierced by towers and gates.

The remainder of your day is at leisure : Consider a stroll in down town, or relax at a coffee shop and mingle with the locals, or have nice Jordanian dinner in one of the local restaurant.
Duration: 3 hours

Stop At: The Baptism Site Of Jesus Christ, Al-Maghtas Jordan
Visit the ancient baptism site of John the Baptist. Drive to the lowest point on earth and Bethany in the Dead Sea. Overnight in Petra.

Morning drive to the ancient baptism site of John the Baptist : After breakfast and check out, we will head west to Amman towards the Dead Sea. Before reaching the Dead Sea, we will stop at the ancient baptism site of John the Baptist. Jesus came to be baptized over 2000 years ago by John and it was at this very spot that history was made and where for centuries hearts yearning for Divine Grace found untold blessings. After becoming lost, the site was recently discovered, and now home to hundreds of thousands of visitors annually from all different denominations and faiths who seek the divine blessings of this holy site.
Duration: 2 hours

Stop At: Dead Sea Region, Dead Sea Region
Continue to the Dead Sea : After a short drive from the baptism site to the Dead Sea and will spend a half day at the beach. The Dead Sea is the lowest elevation on dry land on the Earths surface. The surface and shores are 422 meters (1,385 ft) below sea level and, because of that, it is the lowest point on earth. Famous for its salinity (over ten times that of the Mediterranean Sea), the Dead Sea is said to be home to the first health retreat. The extreme salt content means no life can survive in the sea. You will enjoy an afternoon at the Dead Sea beach and be able to float and enjoy the natural therapy by rubbing yourself with mud from the Dead Sea.

Drive to Wadi Musa (Petra) : After the Dead Sea break, we will head south to Wadi Musa city where ancient Petra located and will stay for 2 nights.
Duration: 3 hours

Visit to Petra : After breakfast, your guide will escort you to the most exciting historical place in Jordan. Petra became one of the Seven Wonders of the World. It is a spectacular rosestone city built by the Nabataens who carved palaces, tombs, temples and storerooms from the rocky cliffs. You will approach Petra through an incredible narrow long path called the Siq. The guide will point out different carvings that represent the culture of the Nabataens. At the end of the Siq, you will catch a glimpse of the amazing structure carved in the mountain until you stand in front of the beautiful treasury. As you continue through the site, other interesting sites include impressive rock-cut tombs, temples and the amphitheater.

You will explore the rest of the site at your own pace but there is a monument that should not be missed. Located on top of hill, on the far side of Petra, this site is a challenging but highly rewarding walk up the steps to the stunning Monastery (approx 1 hr) where you can appreciate the breath-taking views from the top of the cliff.

Please note a lot of walking is required to see all the sites and viewpoints of Petra. There is restaurant for lunch at the site and small cafes for drinks.

Stop At: Little Petra, North of Petra, Petra - Wadi Musa Jordan
Visit the ancient village of Petra. Explore the footsteps of Lawrence of Arabia in Wadi Rum and sleep under the stars.

Short drive to Beidha and explore little Petra : This morning after checkout, you will head to little Petra. Al Beidha or Little Petra, is only a few kilometres from Petra and it is literally hidden away in the center of a mountain. It is believed that Little Petra was an important suburb of Petra, the entry and exit point for the trade routes to the north and north-west. The site contains buildings that have been carved into the sandstone, used as residences, storages and tombs, with water channels and cisterns. The stone is whiter than the heavy rose color of Petra. The walk through this ancient city is breathtaking and helps remind us again of the capabilities and sense of community of these ancient peoples shared.
Duration: 1 hour

Stop At: Wadi Rum, Wadi Rum, Al Aqabah Governorate
Enjoy the magnificent desert of WadiRum : After visiting Little Petra, you will continue to follow in the footsteps of Lawrence of Arabia and drive through the extraordinary scenery of Wadi Rum, one of the most beautigul sand dune deserts in the Middle East. This area of Jordan is quite isolated and the only inhabitants living in this area are the Bedouin people. It was home to T.E. Lawrence during the Arab Revolt against the Ottomans in World War I. You will spend the remainder of the day at Wadi Rum and sleep in a simple desert camp with a choice of sleeping under goat hair tents or under the stars. The tents include mattresses and blankets. The conditions at the desert camp are usually basic but you will find toilet facilities. Also, dinner will be included and is a wonderful part of desert camping experience.

Jeep safari Tour : The best way to explore the beauty of Wadi Rum desert is the jeep safari. This excursion is not included in the tour and is optional. Wadi Rum is full of beautiful rock formations and traces of ancient civilization carved in the mountains. The 2 hour safari, a definite trip highlight, will give you a chance to see some of the most beautiful and sublime desert scenery on the planet.
Duration: 5 hours

Stop At: Aqaba, Aqaba, Al Aqabah Governorate
Drive to Aqaba, Jordons only sea port city. The rest of the day is at your leisure.

Morning drive to Aqaba : After breakfast, we will continue our exploration of Jordan and drive to the Red Sea port of Aqaba. As the Red Sea resort for Jordan, it is a free zone area and major trading port. Aqaba is great gateway in winter for tourists and Jordanians alike. After arrival to Aqaba, you will check in at your hotel. The remainder of the day is at your leisure.

Free day to enjoy Aqaba : There are many ways that you could spend a beautiful day in Aqaba, which is famous for its beaches and nice snorkeling spots. There are many nice restaurants and cafe shops that serve local food. As Aqaba is the only free zone area in Jordan, you may think of shopping for some souvenirs and as a way to interact with the locals.
Duration: 8 hours

Stop At: Karak, Karak, Karak Governorate
Drive back to Amman and visit to the Crusader Castle of Kerak. Continue to Mt. Nebo and enjoy a spectacular view of the Promised Land.

Drive back to Amman : After breakfast, we will head back for our last night to Amman, the capital of Jordan. Along the way to Amman, we will stop and visit a few interesting and important sights from the history of Jordan.

Trip to the Crusader Castle of Kerak : The first visit would be to the fort town of Kerak to visit the Castle of Kerak. The castle was built by the orders of King Fulk, the crusader king of Jerusalem and became the headquarters of the pagans. Built on a hill to dominate the town, it was only in crusader hands for 46 years when Saladins army occupied the town, dominated the castle, converting it to Islam. The castle played an important role in protecting the caravan route and pilgrimage. The castle itself has been partially restored and has endless passageways and rooms. It is an impressive insight into the architectural military genius of the Crusaders.
Duration: 1 hour

Stop At: Madaba, Madaba, Madaba Governorate
Madaba : The historical town of Madaba is famous for its Ottoman-style houses and beautiful Byzantine-era mosaics, including the famous 6th-century mosaic map of Jerusalem and the Holy Land at St Georges Church. Other mosaic masterpieces found within the Church of the Virgin and the Apostles and in the Archaeological Museum depict a rampant profusion of flowers and plants, birds and fish, animals and exotic beasts, as well as scenes from mythology and everyday pursuits such as hunting, fishing and farming. If these interest you, youll be delighted to know that literally hundreds of other mosaics from the 5th to 7th centuries are scattered throughout Madabas churches and homes.
Duration: 1 hour

Stop At: Mount Nebo, Madaba Jordan
Mt. Nebo : After our visit to Kerak Castle, we continue our road trip toward the city of Madaba. Before we reach the desired city, we stop for our second spectacular visit to Mt.Nebo, where there is a church that has well preserved mosaics situated among beautiful scenery. The most impressive part of this visit is the breathtaking view from the top of the mountain; the spot were Moses looked out onto the promised land.
Duration: 1 hour