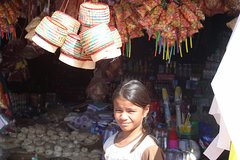 Cool down in the highlands! Drive up to the Bolaven Plateau, a place high above the Mekong Valley known for its temperate, coffee plantations and waterfalls. Rivers run off this high plateau in all directions and then plunge out to lush forests in a series of spectacular cascading waterfalls.

Day 1: Pakse Paksong > Tad Fan Waterfall > Tad Yeung > Tad Lor Waterfall > Ban Phok Phum > Pha Suam Waterfall > Pakse
We depart from our office in Pakse and drive for around 19km to a small village which is famous for knife making, we spend some time here to see how knives are produced using traditional techniques before continuing onwards for another 14km to visit some tea plantations, here we see how tea is grown and produced, after which we carry on once again until arriving at the stunning Tad Fan waterfall. Here we take some time to look around and explore the local area which is home to coffee plantations, after which we head on to Tad Yeung waterfall which is where we shall enjoy lunch and take some time to relax or swim etc..

In the afternoon after we head onwards to the fascinating Paksong Market which sells a great variety of different products and is a great place to look around! After spending time at the market we head on to Tad Deng waterfall after which we head on to the ethnic Mon Khmer village of Kopong, the people are of Cambodian heritage and have a completely different culture and language to that of the majority Lao people. We head onwards from the village to Pha Suam waterfall which is the final stop and marks the end of an exciting day of sightseeing.
Approximately: 5 hours driving, 2 hours walking