A Glance of Laos 4 days 3 nights 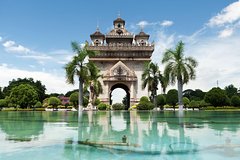 A Glance of Laos 4 days 3 nights

4-day Laos classic tour covers the 2 main cities of Laos that are the capital of Vientiane and the ancient city of Luang Prabang. Some of the highlights includes Buddha Park, Pak Ou caves, Kuang Si waterfalls, and the mighty Mekong river

Stop At: Wattay International Airport, 19 ຖະໜົນສາຍລົມ, Vientiane, Laos
On arrival at the airport, you will be met and transferred to check in the hotel.
Duration: 45 minutes

Stop At: Vientiane, Vientiane, Vientiane Prefecture
After a soft rest, start your 4-day Laos Classic Tour with the visit to the major sights of the capital; including the oldest Wat Sisaket, the temple with thousands of miniature Buddha statues and the former royal temple of Wat Prakeo, which previously housed the famous Emerald Buddha Image.
Duration: 45 minutes

Stop At: Patuxay Monument, Ave Lane Xang, Vientiane 0100 Laos
On the way to Laos national icon, the famous and sacred structure of That Luang Stupa, we stop enroute to take some pictures of the imposing Patuxay Monument, which is well known as Vientianes own Arc de Triumph.
End your tour of the capital along the banks of the Mekong River as the sun begins to set. Stroll along the river, stop to enjoy a cold drink, or sample a snack from one of the many local food stalls.
The welcome dinner will be served at the local restaurant with the traditional dance and folk song, the best chance to experience the local culture. Overnight in Vientiane
Duration: 3 hours

Stop At: Wat Si Muang, 15 Rue Bourichane, Vientiane 0100 Laos
In the morning, we will first visit Wat Si Muang, which is very famous for its supernatural power. After that drive to Buddha Park which takes around 45 minutes away. On the way, stop and take photos of the Friendship Bridge which was built by the Australian government in 1994 and links Laos and Thailand.
Duration: 1 hour

Stop At: Buddha Park, Thanon Tha Deua, Vientiane Laos
Arrive at Buddha Park and enjoy a stroll around the park. Also known as Xieng Khuan, this unusual park is filled with over 200 Buddhist and Hindu statues. The quiet and tranquil setting along the Mekong River is a contrast to the slightly eccentric sculptures which were built in 1958 by a Laoss shaman. The concrete sculptures are bizarre but intriguing, sitting majestically in the peaceful park.
Duration: 2 hours

Stop At: Mai Savanh Lao, Bp 7710, Vientiane 0100 Laos
After visiting Buddha Park, start the drive back to Vientiane. En route, stop at Mai Savanh to explore the traditional textiles of the Lao people. This shop specializes in high quality silk products and involves several families in their process, from the northern province of Luang Nam Tha Province and the southern provinces of Attapeu and Sekong. (Note: Mai Savanh is closed on Saturday & Sunday)
Duration: 45 minutes

Stop At: COPE Visitor Centre, Boulevard Khouvieng National Rehabilitation Centre, Vientiane 0100 Laos
In the afternoon, visit COPE, an association working to help landmine victims. A visit to the center provides in-depth information about the history of the American/Vietnam war and the lasting impact of unexploded ordinances (UXO) in the area and the efforts underway to clear them.
Duration: 1 hour

Stop At: Pak Ou Caves, Near Pak Ou the Tham Ting, Ban Pak-Ou 0603 Laos
In the morning, we embark on a cruise upstream on the Mekong River, which also gives us a breathtaking view of the tranquil countryside, before reaching the mysterious Pak Ou Caves, a 16th century cave monastery filled with thousands of Buddha images, which locates 25 Kilometers North of Luang Prabang in the limestone cliffs overlooking the Mekong river.
Duration: 3 hours

Stop At: Kuang Si Falls, Luang Prabang 06000 Laos
In the afternoon, we will drive south to Kuang Si waterfalls, which is the biggest in the Luang Prabang area with three tiers leading to a 50-meter drop into spectacular azure pools before flowing downstream. The pools also make great swimming holes and are very popular with both tourists and locals
We will also take a short visit to the Bear Rescue Center, which houses a couple of dozen animals rescued from the hands of poachers and traffickers.
On the way back to Luang Prabang, we will take a short visit to the Ock Pop Tock Living Craft Center, set serenely close to the Mekong, this beautiful, traditionally styled workshop, where weavers, spinners and batik makers produce top-quality fabrics, offers free tours every half-hour. This is also one of the best spots to admire the sunset in Luang Prabang
Transfer back to your hotel late afternoon. Overnight in Luang Prabang
Duration: 4 hours

Stop At: Mount Phousi, Sackarin road, Luangprabang, Luang Prabang 0600 Laos
After breakfast, we climb up to the top of Mount Phousi for an enjoyable exploration of the sacred, gilded stupa as well as a panoramic sunset view of the city and the Mekong River.
Duration: 30 minutes

Stop At: Wat Xieng Thong, Luang Prabang Laos
Your city tour continues with a visit to the magnificent Wat Xiengthong, a superb piece of Lao temple architecture, which presents a sweeping two-tiered roof and ornate mosaics including a beautiful tree of life glass montage on the rear temple wall.
If time permits, we will take a short walk around the small streets of city center, watching the life of local people.
We then transfer out to the airport to take the departure flight finishing your 4-day Laos Best Tour
Duration: 2 hours