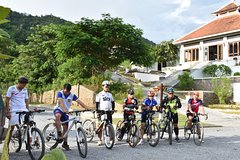 This half day cycling guided tour takes you to the main attractions in Vientiane, the city of the fullmoon - an ancient city, situated on the bend on the left bank of the Mekong that is the largest city and the capital of Laos.

In the morning time, we take a sightseeing tour of Vientiane, to visit religious museums of Wat Sisaket, the oldest temple to have been survived from the Siamese war of 1828 and its cloister contains more than 8000 Buddha statues.

Ho Prakeo, the former home-temple of the Emerald Buddha statue or Pra Keo from the early time of Lane Xang Kingdom until 18th century, but today it contains a collection of Buddha statues, antiques and all artifacts found in around Vientiane.

That Luang Stupa, the single most important monument in Laos, which was built to cover the original small stupa containing a piece of the chest bone of Buddha, That Luang serves as the main and symbolic stupa in Laos. It's also our national symbol and recognizable throughout the world, gathering place for national Buddhism ceremony. It's also the biggest stupa in Laos.

Patouxay (Arch de Triumph), built quite recently in commemoration of those who died during the wars in the past and it is today as the land-mark of Vientiane.