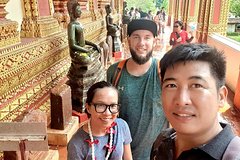 2. Not including entrance tickets and tax 3. Ticket cost is USD20 for each person, to be paid cash on arrival.

Patuxai is a war monument in the centre of Vientiane, Laos, built between 1957 and 1968. The Patuxai was dedicated to those who fought in the struggle for independence from France

Pha That Luang is a gold-covered large Buddhist stupa in the centre of the city of Vientiane, Laos, built in the 3rd century,

Wat Si Saket is the only temple in Laos that survived the Siamese occupation, which destroyed much of the capital in 1828. It features over 10,000 Buddha sculptures of varying sizes and styles.

Vientiane boasts several beautiful temples or wats, but one of the most impressive and interesting of them is Wat Ho Phra Keo.

Buddha Park (Xieng Khuan) is an open-air sculpture park with giant sculptures of Buddha and Hindu deities. Located 25km southeast of Vientiane, the park was founded in 1958 by monk and sculpture artist, Bunleua Sulila.