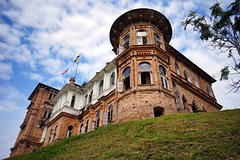 Ipoh is a city in northwestern Malaysia, known as a gateway to the Cameron Highlands hill station.

Sam Poh Tong is a Buddhist temple in a limestone cave. To the south, Kellies Castle is an unfinished mansion built by a Scottish planter. Southeast, the vast Gua Tempurung cave has dramatic rock formations.

Ipoh Town Hall was completed in 1916 after extended construction period of over 3 year due to shortage of materials during the early part of the First World War. The building was originally used as the main administrative offices in Ipoh, as well as it Post Office and for a time also the District Police Office. The Post Office, City Government and Police Headquarters have all now now relocated to different buildings within Ipoh and the Town Hall is now used a function space for weddings and public events. This grand old building have proved in the long run too for the costly for the city to update and maintain and has been been sadly abandoned in favour of new buildings which are cheaper to run.

Ipoh railway station is a Malaysian train station located at the south-western side of and named after the capital city of Ipoh, Perak. It serves as the main railway terminal for the state. It is owned by Keretapi Tanah Melayu Berhad, and offers KTM Intercity services, as well as handling freight trains.

Designed by Arthur Benison Hubback, it was first constructed and opened in 1935, making it the second concrete station to be constructed in the town. The building also houses the hotel called the Majestic Hotel. Affectionately known as the Taj Mahal of Ipoh by its locals, it closely resembles its Kuala Lumpur sister.

As part of KTMB's Rawang-Ipoh double tracking and electrification project which completed in January 2008, the Ipoh station has undergone rehabilitation to not only incorporate modern elements while keeping its historical look, but also accommodate the double track.

Tempurung Cave is a cave in Gopeng, Perak, Malaysia. It is popular among spelunkers, or caving enthusiasts. More than 3 km long, it is one of the longest caves in Peninsula Malaysia.

The tunnel of the cave runs from the east to the west covering a distance of about 2 km under the limestone hills known as Gunung Tempurung and Gunung Gajah. It is made up of 5 large domes and is believed to have existed since 8,000 B.C., about 10,000 years ago.

It comprises of five huge domes with ceilings resembling coconut shells. Each of these domes has different calcium formations and marble there exist in differing temperatures and water levels. These caves are famous for its breathtaking gallery of stalagmites, stalactites and other amazing rock formations that are super speleological wonders, found only in this part of the world.

Kellies Castle in Peraks Batu Gajah near Ipoh combines romance, tragedy and mystery. Young Scotsman William Kellie Smith moved to British Malaya, now Malaysia, made and lost his fortune and left an unfinished mansion to be reclaimed by the jungle. Here is the entrancing story.

William had a passion for the weird and wonderful. Kellies Castle combines several styles. Look closely and see Moorish, Indo-Saracenic and Roman influences. He imported several Tamil workers, and bricks and marble from India. William had a dream. He wanted the biggest and most opulent mansion in Malaya to spite the other snobbish bureaucrats who once doubted his wealth and ability in more desperate times. And he dreamed big. The mansion itself was several storeys high with a huge planned tower, an indoor tennis court and even a rooftop entertainment complex to host parties. It almost had Malayas first-ever elevator. Almost. But Williams destiny wasnt to be as once more his life turned on a dime. Poor investments dwindled his wealth and souring relationships with the other administrators made his future look bleak.

Welcome to the HOGA Experience at Gaharu Tea Valley Gopeng. HOGA had a quiet and unofficial inception in 1992. At present, the plantation located within the quaint little town of Gopeng, has 200,000 trees of a special 12 in 1 super hybrid Aquilaria spp and other natural attractions that will leave you mesmerized.

The Gaharu tree although listed as an endangered species by the Convention on International Trade in Endangered Species of Wild Flora and Fauna known as CITES, is not only organically cultivated here to further prevent its extinction but Gaharu Tea Valley Gopeng is the only plantation with 300 acres of the special 12 in 1 hybrid Aquilaria spp trees.

Limestone cave temple on 12 acres with Buddha sculptures & a garden with a reflexology footpath.

The Kek Lok Tong Cave Temple is a tourist attraction situated in the natural and picturesque area of Gunung Rapat in the south of Ipoh - the capital of Perak state in west Malaysia. The cave temple sits on a 12 acre site and was used as early as 1920 as a place of worship. In 1960, the cave became part of an iron mining site, this temple is set in a huge cave in the limestone outcrops behind Gunung Rapat.

The Kek Lok Tong complex comprises a central altar featuring a number of Buddhist figures as well as various deities of the Chinese pantheon. The most unique about the caves is there are another great garden view once you get inside the caves. The limestone hill is made up of light grey to white crystalline Kinta limestone inter bedded with about 5 mm to 1 cm think argillaceous material bands. Primary iron can still be seen within the limestone. The award winning landscape garden features a jogging path circling two lakes and one of the longest reflexology footpaths in Ipoh.

Entrance is FREE but there is a donation booth if you would like to leave a contribution towards upkeep.

In 1926 Chong Sen Yee and his wife Choong Chan Yoke who came from Jiao-Ling province of China, discovered Perak Tong. On approval from the Perak State Government they started to develop the cave. As Chong Sen Ye was mainly involved in the planning and development of the cave temple, his wife went all out to look for donations to carry out the plan, locally and internationally. After more than 50 years of diligent and careful work n and around the cave temple, Perak Tong has become one of the best cave temples in Malaysia. Chong Sen Yee passed away in 1980 and his wife Choong Chan Yoke in 1983, handing the heritage to the son Chong Yin Chat. He put even greater effort into the temple and thus enhanced Perak Tong into an international tourist spot in Perak.

There are several major attractions available at the temple like the beautiful landscape flower garden in front of the temple. Here you can feed the monkeys in the morning and late evenings. As you enter the temple, you will be greeted with a 40 feel tall Buddha statue. The Inner part of the cave has natural limestone wonders and decorated with statute of deities. There are also colourful paintings and calligraphic writings by Chong Yit Chat himself and among others. There is a staircase of about 450 steps, which takes you right to the top of the limestone hill, where one can have an overall view of Ipoh city and its surroundings.

Entrance is FREE but there is a donation booth if you would like to leave a contribution towards upkeep.

In 2015, Ipoh Old Town was such a quiet town that travellers would call it a laid-back town with cafes, traditional coffees and food and flourishing street arts. Not much was heard of the three Concubine Lanes. In July 2016, Lonely Planet listed Ipoh as one of the best Asian destinations to visit. Photos of the Concubine Lanes started appearing in news articles. The lanes were opened.