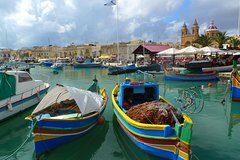 See the Malta the way it was meant to be seen with a personal Tour Guide which can give you detailed information of Malta and its marvelous history.

This Tour will not include more than 7 people each tour.

A full day 8 hour tour is packed up with the most iconic locations in Malta that are impossible to miss as these attractions are what made Malta you see today.

Included in the Tour is a Private Air-conditioned Brand new Minivan which will provide the transportation services for only 7 People (Maximum) and a Private Tour Guide.

Meeting point is in Mdina, however pick-ups can be requested.

For a gift with a difference, pay a trip to Ta Qali. This small, but well-stocked craft village is based in an old RAF wartime airfield. With Nissan huts now converted on the interior, they home all kinds of original Maltese gifts and crafts. With workshops showing the skills in pottery and filigree-making, to local gemstones and homemade preserves, this quaint village will provide you with plenty of traditional gifts.

A main focal point in St Pauls Bay, the National Aquarium can be seen from miles around. An attraction for all the family, the aquarium is split into separate zones, each depicting different themes such as the Grand Harbour, Shipwrecks, and the Tropical Ocean.

The original film set of the 1980 film, Popeye starring Robin Williams. Spend a whole day in Sweethaven visiting each building, enjoying their pools, taking a boat ride, watching animators and having a bite to eat. Set in stunning surroundings, there are regular buses directly to the set with something for the whole family to enjoy and open all year round.

Only allowing 80 visitors a day, tickets need to be booked in advance for an allocated time slot. This prehistoric underground burial chamber was discovered accidentally in the early 1900s during construction work. Dating back to around 4,000 BC to 2,500 BC, this UNESCO site is said to have had the remains of over 7,000 individuals dispersed between its different levels of chambers. With ochre-painted symbols still visible on the walls and carvings in the masonry, this eerie yet spectacular place was the discovery site of Maltas now famous Sleeping Lady sculpture.

A collection of naturally formed caves and a 30-foot arch make up the Blue Grotto. Attracting over 100,000 visitors a year would suggest this is a place worth visiting. With the waters leading in reflecting colours of cyan and emerald greens, the Blue Grotto is accessible to visit all year round, weather permitting. Experienced sailors will get you there safely even if the waters are a bit choppy. A photo opportunity not to be missed.

Located in the area of Marsaxlokk, St Peters pool attracts swimmers and snorkelers to what is described as a natural swimming pool. Its strikingly clear, azure waters invite many to safely jump in from the rocks surrounding it, and with plenty of flat ledges available, it is a perfect place to spend a day swimming, enjoying the scenery both under the water and above.

The Valletta Waterfront is also the gateway to Maltas capital city, Valletta  a city built by gentlemen for gentlemen. In fact, as one of the most successful Mediterranean ports, the Port of Valletta welcomes more than half-a-million cruise passengers into this open air museum.