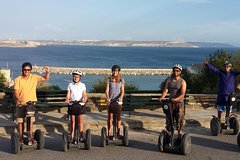 Join this 5-hour Segway tour with breathtaking sightseeing, accompanied by fresh aroma of pastries, followed by the taste of a traditional 'ftira', while hearing many stories about the island.

You have an option to choose either morning, or afternoon departure for this journey. Once decided, depart form Mgarr ferry terminal and head up to the scenic Belvedere Qala, that overlooks the harbor and Gozo channel with sister islands of Maltese Archipelago - Malta and Comino on the back. Qala is one of the most beautiful villages in Gozo.

Your next destination is Nadur, one of Gozo's famous three hills and home to three of the most popular bays on the island - Dahlet Qorrot, San Blas and Ramla il-Hamra. Nadur is also the place to go to if you're looking for an authentic traditional culinary experience of the iconic wood stove bakeries. Here you will stop for a mouthwatering 'ftira' and some refreshing tea before heading to one of the best hidden secrets of the island - Calypso Cave.

While observing lush green valleys beneath, continue down the hill to Ramla il-Hamra Bay, which literally translates as "Red Golden Sand". This is the largest bay on the island with red sandy dunes and shallow, crystal clear water. Congratulations on passing across the entire island! After a short break, hop back on your Segways and head deep into the remote valley between the steep hills of Nadur and Xaghra, where you will stop to handpick some wild seasonal pears or pomegranates. Most of the locally grown fruits come from this valley's orchards.

Later, pass through the oldest village in Gozo, Xewkija. The Church of Saint John the Baptist, commonly known as the Rotunda of Xewkija is the biggest on Maltese islands and dominates the whole village. The dome is the worlds third highest unsupported dome. The interior is decorated with fine sculpture and modern paintings. The floor is of polished Carrara marble. The silhouette of the imposing church with the sun setting behind it towards the west will create a fantastic photo opportunity. Upon commencing your way back to the harbor, pass through the outskirts of Mgarr ix-Xini valley, which recently became famous for being the set for Hollywood blockbuster "By the Sea", starring Brad Pitt and Angelina Jolie. This area is also renowned for its rich historic sites including the Cart Ruts, dating back to the Roman times and Fort Chambray, built by the Knights of St John in the late 1700's.