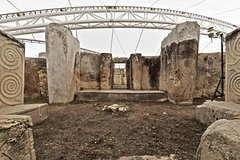 Your day tour begins with a hotel pickup at 9.00am. Your first destination will be Tarxien Temples, The Tarxien Temples are an archaeological complex in Tarxien Malta. They date to approximately 3150BC. The site was accepted as a UNESCO World Heritage Site in 1992 along with the other Megalithic temples on the Island of Malta. Your second stop will be Hal Saflieni Hypogeum, The Hypogeum of Hal Saflieni is a Neolithic Subterranean structure dating to the Saflieni phase in Maltese prehistory, located in Paola Malta. It is often simply referred tobas the Hypogeum, literally meaning ``underground `` in Greek. Your third stop will be Marsaxlokk, where you can have a lovely mediterranean lunch (your expence), Marsaxlokk is a small traditional fishing village in the South Eastern Region of Malta. It has a harbour, and is a tourist attraction notable for its picturesque views, its fishermen and history. As at march 2014 the village had a population of 3,534. Your next stop will be Dingli Cliffs, Dingli is a village in the Northern Region of Malta with a population of 3,608 as of March 2014. It is 13 kilomtres from the capital Valletta and 2 kilomtres from nearest town Rabat. The village lies on a plateau some 250 meters above sea level, which is one of the highest points of Malta. Fifth location will be St Paul's Catacombs, St. Paul's Catacombs are some of the most prominent features of Maltas early Christianity archaelogy. The archeological clearing of the site has revealed an extensive system of underground galleries and tombs dating from the third to the eighth centuries CE. Your last stop will be Mdina, also known by its titles Citta Vecchia or Citta Notabile, is a fortified city in the Northern Region if Malta, which served as the island's capital from anticuity to the medieval period. After Mdina we head back to the Hotel or you can choose to go some where else at extra cost.