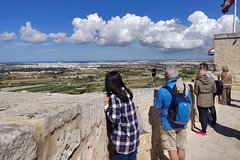 This tour finds itself in Malta's former medieval capital city. It will be an opportunity to discover its medieval history and charm on foot. The tour commences in Mdina, moving towards Rabat, and ending with a short visit to San Anton Palace & Gardens.

Walk through the old streets of fortified Mdina

Travelers will walk through the old city Gate, while enjoying the baroque architecture

Also known as the Metropolitan Cathedral of Saint Paul, is a Roman Catholic Cathedral in Mdina, Malta.

A view of the Greek's Gate, Mdina

A look at the Carmelite Church's Facade

The National Archives of Malta is the central archive maintained by the Mediterranean island nation of Malta. The Archives has been housed in the Grandmaster's Palace for most of its lifetime, having moved to three separate locations during the late 1980s.

A cave were the saint is said to have preached while inhabiting the island of Malta.

A look at the facade of Rabats fascinating Church

On the way back to your drop off point, you will get the opportunity to view the San Anton Gardens, where the President resides in the Palace during the Summer Months.