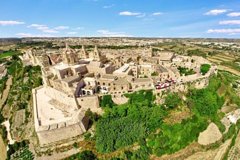 During this tour you will first visit Mosta, famous for its large dome, which is the third largest in Europe. Second stop will be at Ta'Qali Crafts Village where you will see the Glass Blowing and also Silver Filigree being made. Third and last stop is in Mdina. In Mdina you will have a walking tour and a coffee break.

You will first drive to the city of Mosta. Inspired by Romes Pantheon, the church in the centre of the city was built in the 18th Century. It became known throughout the country in 1942 when during World War II, a dropped bomb failed to explode, thus sparing the lives of some 300 people. This church has the third largest dome in Europe.

You will then visit the town of TaQali, located nearby was once a British WWII outpost, but has been converted to a village for local handicrafts. You will be able to watch local artisans at work blowing elaborate glass art pieces, intricately assembling original silver filigree jewelry, carving the local limestone and many more. This is the perfect place to pick up treasures that will remind you of your Malta visit.

Finally you visit Mdina, Maltas ancient capital. It rests in a very majestic way, on top of a hilltop right at the center of the island. Mdina is also called The Silent City because of its literally quiet and narrow streets that give off a quaint yet very homey atmosphere. Mdina is not only considered to be one of Maltas precious jewels, but this ancient walled city is one of the best medieval fortifications. You will see magnificent views of the entire Maltese landscape. In Mdina you will have some time to relax and enjoy the area.