Pick Up From Valletta Cruise Port To Mdina (private cab) 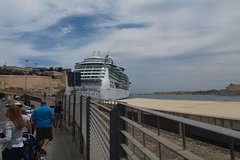 Pick Up From Valletta Cruise Port To Mdina (private cab)

Mdina (Maltese: L-Imdina [lɪmˈdɪnɐ]; Phoenician: , Melitta, Ancient Greek: Μελίττη Melíttē, Arabic: مدينة‎ Madinah, Italian: Medina), also known by its titles Città Vecchia or Città Notabile, is a fortified city in the Northern Region of Malta, which served as the island's capital from antiquity to the medieval period. The city is still confined within its walls, and has a population of just under 300, but it is contiguous with the town of Rabat, which takes its name from the Arabic word for suburb, and has a population of over 11,000 (as of March 2014).[2]

The selected driver shall pick you up from Valletta Cruise Port Malta at your desired time with name plate with your name. He shall drive you to The magical silent city Medina and drop you off at Medina waiting for you two hours so you can enjoy the beauty of Medina. After two hours he wil pick you up again and head back to Valletta