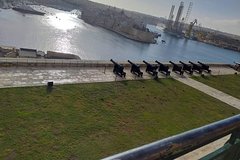 Valletta is Malta's lilliputian capital, built by the Knights of St John on a peninsula. Its founder decreed that it should be 'a city built by gentlemen for gentlemen', and it retains its 16th-century elegance. It may be small, but it's packed full of sights; when Unesco named Valletta a World Heritage site, it described it as 'one of the most concentrated historic areas in the world'.

This tour includes all the main attractions in Valletta with all the admission tickets included.

Included in this tour is also a licensed tourist guide which will guide you through the city explaining all the history and culture behind the attractions.

Lunch is also included in this tour which includes a choice between Lasagne, Fresh Salad, Chicken & Mushroom Pie, Spinach & Tuna Pie or Quiche (choice of main course is to be given prior the tour), Freshly Baked Gateaux or Fresh Fruit Salad (depending on the season) & 1 bottle of local still water & a glass of local red/white wine.

Valletta (or Il-Belt) is the tiny capital of the Mediterranean island nation of Malta. The walled city was established in the 1500s on a peninsula by the Knights of St. John, a Roman Catholic order. Its known for museums, palaces and grand churches. Baroque landmarks include St. Johns Co-Cathedral, whose opulent interior is home to the Caravaggio masterpiece "The Beheading of Saint John."

If you were in any doubt over how important religion and worship were to the Order of the Knights of St. John, a visit to the St. Johns Co-Cathedral is the ultimate proof. Without doubt, its probably the best point of interest in Valletta.

With an unassuming exterior, you would never expect to find a place so richly decorated inside its walls and entering the cathedral for the first time is an awe-inspiring experience.

Having served as the conventual church of the Knights for over 200 years, the St. Johns Co-Cathedral is a prime example of artistic impression of the High Baroque era.

The Grandmasters Palace was once the seat of power for the Order of the Knights of St. John, served as the Governors Palace during British rule and nowadays houses the Office of the President. Until recently it also housed Parliament until the new Parliament building near City Gate was built.

The Palace was one of the first buildings to be erected by the Knights soon after the foundation stone to the city was laid in the 16th century. Expanded and embellished throughout the centuries, the Palace State Rooms (name of the museum) and its halls and rooms are something to behold.

The Palace Armoury (accessible through a separate entrance to the side of the Palaces courtyard) houses the worlds largest collection of arms and armour that is still housed in its original location. The collection is a fascinating glimpse into some of the physical artefacts that remain from past centuries and battles fought.

The Malta Experience Is Malta's Premier Tourist Attraction. Discover the turbulent and inspiring history of the Maltese Islands with this unique and informative audio-visual tour that combines a 45-minute historical documentary show and a 30-minute visit of La Sacra Infermeria, an old hospital built by the Knights of St. John. This tour is an ideal first stop for visitors who wish to discover the Maltese Islands and step back in time to relive Malta's history. The attraction is open daily including Saturdays and Sunday (from 11:00 AM every hour), and the cafe and souvenir shop are open daily.

Built and used as a defensive platform by the Knights, the Saluting Battery functioned both as an artillery platform to defend against attacks taking place within Grand Harbour as well as to greet dignitaries and friendly ships entering the harbour.

At noon and 4pm sharp, through a short re-enactment, one of the restored guns is fired and its quite a spectacle to admire.

The Upper Barrakka Gardens are a public garden in Valletta, Malta. Along with the Lower Barrakka Gardens in the same city, they offer a panoramic view of the Grand Harbour. The gardens are located on the upper tier of St. Peter & Paul Bastion, which was built in the 1560s.

The Lower Barakka Gardens is a garden in Valletta, Malta, and it is twinned with the Upper Barrakka Gardens in the same city. It offers a view of the Grand Harbour and the breakwater.